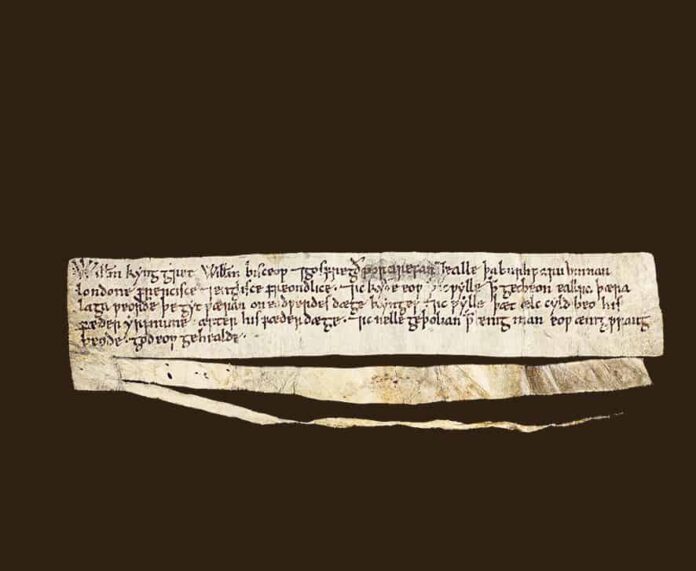 Tucked in amongst slick architecture practices and artisanal coffee shops in Clerkenwell, a tiny scrap of parchment is celebrating its 950th birthday. The William Charter was issued to the City of London by William the Conqueror in 1067 – the year after the Norman conquest – confirming the legal rights of the citizens of London.

Though it granted nothing new to the Londoners, who were already exercising these rights with gusto, the charter is significant because it is the earliest known royal or imperial document to guarantee the collective rights of the inhabitants of any town. It also marked the unofficial beginning of the London Metropolitan Archives (LMA).

“From what we can tell, [the William Charter] was the first time in London’s history that someone said, ‘Well we’ve got to keep this’,” explains LMA’s principal archivist Laurence Ward.

Today, the charter, which measures just over 15 centimetres wide and 2.5 centimetres high, is one of about three million historical artefacts carefully stored in acid-free boxes and filed away in up to 40 strongrooms, purpose-built for preserving documents in the former publishing house and newspaper office on Northampton Road.

It is one of the archives’ more popular attractions – and is currently on display over at Guildhall Art Gallery – but Laurence says the charter is just the tip of an iceberg that is about to be uncovered with a new digital project to mark the LMA’s 950th anniversary.

This spring, the LMA, which is owned and managed by the City of London Corporation, will be making 950 of its documents available online, covering almost 1000 years of London’s history. The refresh offers digital access to gems such as the William Charter and Magna Carta for the first time, alongside artefacts that have been keeping a lower profile but hold just as much significance as their more famous neighbours on the shelves.

“The idea is to give people a flavour of what’s actually here,” Laurence says.

Among Laurence’s favourite items that fly under the radar are what is thought to be the first printed map of London from 1572, and a collection of early-1900s ledgers from shoemakers Peal & Co that contain outlines of some fairly famous feet.

“A salesman would take the book to a customer and trace around their foot, including any pressure points, and keep it on file for whenever they wanted new shoes,” Laurence explains.

From the ledgers, LMA archivists were able to find outlines and notes of feet relating to Sir Lawrence Olivier, Fred Astaire, Boris Karloff and Karl Marx; the latter looks to have been about a 7.5 by today’s standards.

The online expansion is a significant milestone for the archives’ ongoing digitisation project, which began around 15 years ago, one Laurence hopes will make the archives more accessible and relevant to a broader range of interests.

Also key to encapsulating the LMA’s broad range of material is the two or three in-house exhibitions on display for several months each year. The current exhibition, The Londoners: Portraits of a Working City, illustrates working life in the Capital from the 15th century through to the 1980s; featuring everybody from nurses and aldermen to trapeze artists and rat catchers, and is on until 5 July.

Planning for an exhibition looking at London’s West End is already well underway for later in the year, and while the installations are always significant draw cards, there remains a great deal to be said for simply turning up to comb through the database until you find something of interest; a process Laurence describes as being rather akin to shopping at Argos.

“You can almost track the growth of London with the growth of collections,” Laurence explains. “The breadth of material we have here is quite hard to explain unless you see it for yourself.”

And with enough to fill more than 100 kilometres of shelving it’s unlikely you’ll get through it all in one afternoon, which is why it’s lucky this place will likely be around for another 950 years.