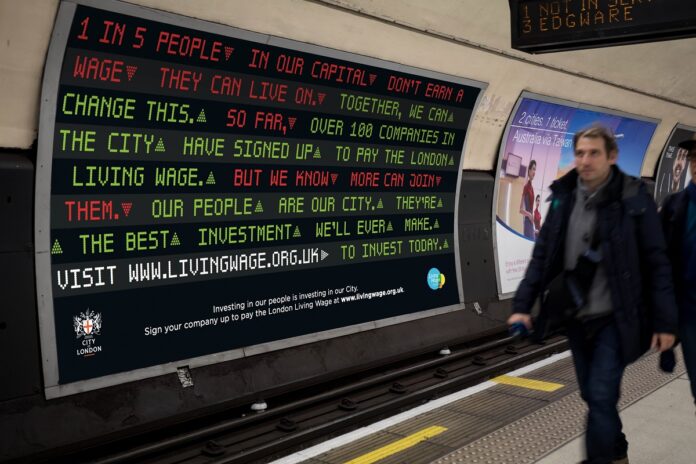 Financial institutions and professional services companies in the Square Mile are being urged to sign up to pay their workers the London Living Wage in a new campaign launched by the City.

One of the City Corporation’s most senior politicians, Catherine McGuinness, said businesses need to pay all their employees the London Living Wage as a minimum.

She is one of the politicians spearheading the two-week campaign which will see posters at Underground stations across the Capital.

There are 273,000 jobs in financial and professional services in the City, with 9,490 related firms based here.

More than 100 of these have signed up to pay the London Living Wage, which is currently £10.55 an hour.

The City launched a two-week campaign on 25 February, backed by the Living Wage Foundation, which will also see posters rolled out at nine of the Capital’s busiest tube stations, including Liverpool Street, Victoria and Paddington.

Councillor McGuinness said it was shocking that one in five people working in the Capital “do not earn a wage that they can live on”, with 27% of people in London living in poverty.

Today, we launched our London Living Wage campaign by celebrating over 100 companies in the City who have already invested in their people by signing up. Look out for our message around your City. #cityoflondon #business #investment #livingwage #ourpeopleareourcity @LivingWageUK pic.twitter.com/H2kpS8Q0Bi

She said paying the Living Wage gives people the “potential to achieve what they want to achieve” and means employers get a “motivated workforce”.

She added: “Our people are our City and they are the best investment we will ever make.

“More than 100 City financial and professional services businesses are paying the London Living Wage, but I know more can join them.

“Paying the London Living Wage is good for business and good for society. But most importantly, it means a better quality of life, help for people to provide for themselves and their families, and giving employees a dignified life.”

Lola McEvoy, head of campaigns at the Living Wage Foundation, said the City Corporation is leading the way as an anchor of responsible pay in the Square Mile.

However, she added: “But many financial services firms still don’t pay their security staff and cleaners enough to live on, and we know much more can be done.

“We believe this campaign can encourage more employers within the City to recognise that paying the London Living Wage is both good for their business, and the right thing to do.”

Last autumn the Corporation, which is a Living Wage employer, beefed up its own Living Wage policy for its employees and people working for its suppliers by pledging to pay the new rate when it is updated in November, rather than waiting until the spring.

Stuart Wright, chair of the Living Wage Foundation and property and facilities director for insurance firm Aviva, which has been a Living Wage Employer since 2006, said the benefits of paying staff a higher rate outweigh the costs.

“We have paid our London-based employees at least the London Living Wage since 2006 and we know the difference it can make to their lives. And it’s not just about money.

“People who receive the Living Wage feel valued for their contribution. This in turn creates pride amongst workers and aids retention and recruitment for employers – so it makes sound business sense too.

“Now all of our UK employees, including those from third-party suppliers who work on Aviva sites, are paid at least the Living Wage.
“If any London employer is considering paying the Living Wage, we’d urge them to stop thinking and start doing.”