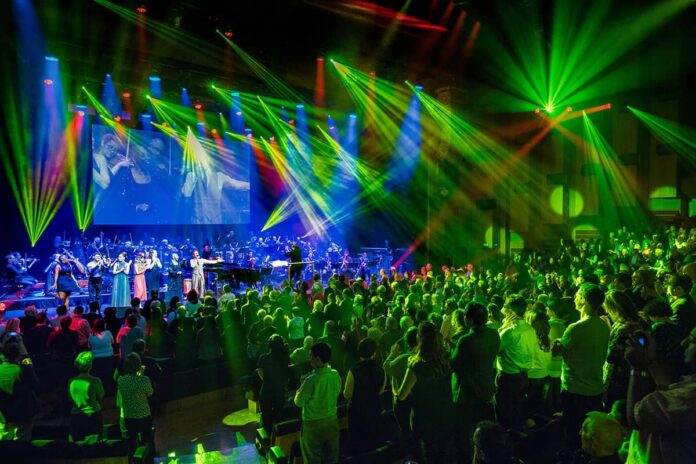 IN 1993, EFG London Jazz Festival co-founder David Jones explained his day job to the Independent in five simple steps: “Hire the hall, book the band, pay the artists, promote it, and hope we get our money back with a meagre profit.”

This was way back when the festival was barely a year old; a city-wide expansion of Camden Jazz Week that would showcase the genre with around 50 shows from international and British artists at venues that play jazz throughout the year.

The 25th London Jazz Festival will be roughly five times the size of the original – the biggest ever – with 250 shows from some of the most famous names in jazz performing at concert halls and clubs across the city over 10 days.

Past performances from the likes of Herbie Hancock, Keith Jarrett and Wayne Shorter have long cemented the festival’s reputation as one of the major international jazz events, but David says his original job description, and that of festival producers Serious, still holds true.

“People like to build a mystique around the festival but I quite like reducing things to the bare essentials and that pretty much sums it up,” he says.

“We’ve gone to some of our favourite venues and stuffed them full of great artists… then it’s just finding your audience and making sure they get the most out of it.”

Of course, he admits this final step has changed significantly over the last 25 years, namely with the advent of the internet in helping artists reach new audiences through online archives and web streaming.

For the first time ever the festival will stream its signature opening night gala concert at Royal Festival Hall live across YouTube and Facebook Live, putting the likes of Seal, Liane Carroll, Miles Mosley, Vanessa Haynes, and Mads Mathias’ performances with Guy Barker’s 42-piece orchestra in front of a potential audience of millions.

“Obviously there wasn’t an internet when we started, and it’s something an individual artist might not do themselves, but digital creates interest and drives so much awareness, which is great for us as a lot of people use the festival as their entry point [for the genre],” David says.

“They don’t know a lot about jazz, but they know they like Miles Davis, and we can introduce them to a few other artists they might like as well – we’re a bit like what the Proms has done for classical music.”

The other thing that has changed over the last 25 years is London’s attitude towards the genre.

“When we started, I think jazz was quite apologetic in a sense that there had been these big stars, but they weren’t with us anymore and there was this question whether young people would still like jazz, is it still relevant?”

“And the answer is yes of course it is, and we’re a reflection of that.”

The 25th EFG Jazz Festival runs from 10-19 November. Go to efglondonjazzfestival.org.uk for tickets.

A trio of bands deliver a taste of world jazz on one stage. Soothsayers deliver the deeply soulful afro-dub grooves that earned them cult status, while Lokkhi Terra takes audiences on a musical journey from the melas of Bangladesh to the streets of Habana via Lagos. British-Asian clarinettist Arun Ghosh completes the set with his IndoJazz Sextet performing music from the brand new album But Where Are You Really From?

Tabla master and one of the world’s foremost Indian percussionists, Zakir Hussain explores how jazz influenced the popular music of India. Performing with singer/violinist Ganesh Rajagopalan as well as jazz stars Dave Holland and Chris Potter, the quartet will trace its  history through the burgeoning Bollywood industry through to India absorbing the jazz spirit through the likes of pianist Louiz Banks and Sanjay Divecha.

The Barbican’s groundbreaking retrospective of the life and work of Jean-Michel Basquiat is further brought to life by British vibraphonist and multi-instrumentalist Orphy Robinson and pianist Pat Thomas performing under their collective alias Black Top. Together with the likes of radical guitarist Jean Paul Bourelly and spoken word artist Anthony Joseph, the pair explore the rich cultural dynamic between free-jazz and paintings like Trumpet, Horn Players and Charles the First, which all demonstrate his love for the genre and its most famous players.

Ben Cottrell’s band of 14 musicians met as students in Manchester in 2008, and have been pushing the ‘big band’ boundaries ever since. This performance kicks off 10th anniversary celebrations for the band, featuring new music inspired by a variety of artists from Michael Jackson to Björk and Gil Evans to Radiohead.

Cuban jazz pianist and composer Omar Sosa and Senegalese kora player and singer Seckou Keita (below) perform music from their first collaborative album together, Transparent Water, in what David calls “a once in a lifetime performance” for the festival. “It’s beautiful, without being very new-agey…this is an absolute must – it will never come back.”