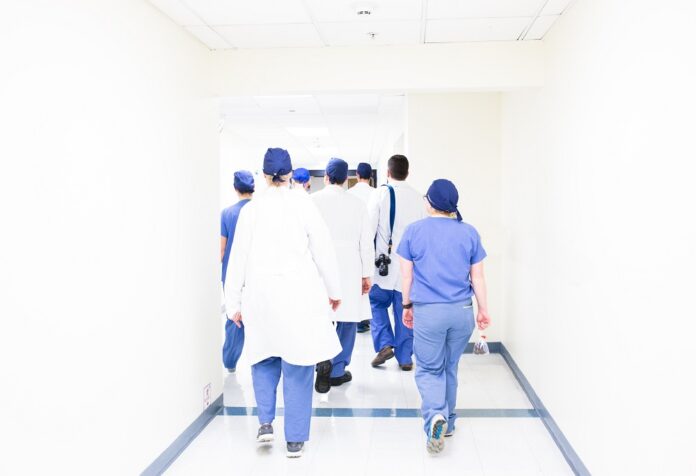 London hospitals could be hit hard by staff shortages next year with tens of thousands still not double-jabbed.

Health Secretary Sajid Javid announced in November that all frontline NHS workers would have to get two doses of the COVID-19 vaccine by April or face losing their jobs.

Official NHS figures show that almost 40,000 NHS workers in London have not been double jabbed – meaning they could be sacked if not vaccinated by then.

Barts Health Trust, which runs five London Hospitals, could be the worst-affected as it has both the largest workforce and lowest vaccination rate in the capital.

This means that 39,624 have not had both jabs and could lose their jobs in spring if they do not receive them.

Barts Health Trust has a workforce of 25,035 – by far the largest staff in London and the second-biggest in the UK.

With a vaccination rate of just 79.8 per cent, staff at Barts Health hospitals have the worst rate in London and the second-worst in the country.

If not vaccinated by April, up to 5,054 staff at these hospitals could be removed from their posts.

Such a huge shortage of staff could have a major impact on NHS services at these hospitals that are under mounting pressure.

Other hospitals across the capital could face similar issues – Barnet, Enfield and Haringey Mental Health Trust and the East London Foundation Trust are second and third-worst for staff vaccine rates – with 80.5 per cent and 80.7 per cent double jabbed.

Guy’s and St Thomas’s Trust – the third-largest NHS employer with 23,407 staff – could face losing 3,929 unvaccinated staff in April, with a double-jab rate of 83.2 per cent.

Other London trusts fare much better – Hounslow and Richmond Community Healthcare Trust has the highest vaccination rate in the city with 89.1 per cent of staff double-jabbed.

However, even these trusts could lose hundreds of staff if they don’t get their vaccines on time.

“This is about patient safety – we know vaccines work and if those in hospital and care are exposed to COVID-19 it could be fatal. It’s our duty to ensure that they are as safe as can be.”

NHS London and Barts Health referred the Local Democracy Reporting Service to the DHSC for comment.