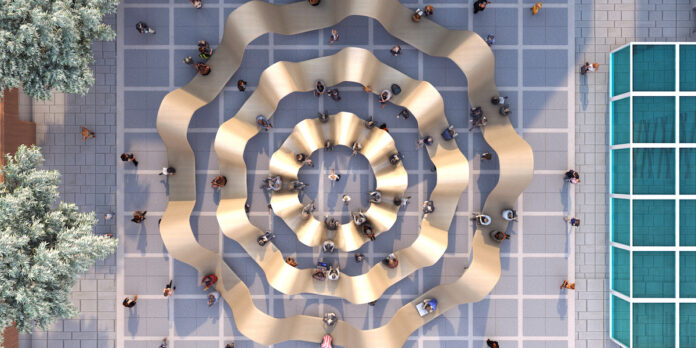 Local and international designers are assembling around the Capital this September for the famous London Design Festival.

Specially curated interactive installations are popping up around different boroughs while countless talks and tours are being hosted by mega design institutions too.

They’re showing off London as the capital of international design – calling upon visitors to give their feedback on everything. After all, this kind of design is meant to be used by the public, weaving its way into the everyday experiences of our lives. If we don’t like it, there’s no use for it.

Check out our guide to the best bits going on in London, focusing on a few centrally located design precincts which you’ve got to explore.

The large-scale installation, fuses innovation and technology, and responds to the changing rhythm of the community: its design features curves for people to sit on and walk under, further enhancing London’s largest pedestrianised neighbourhood.

Made from scaffolding planks, Paul Cocksedge is collaborating with Essex-based flooring company, White&White, to re-imagine and re-use the building wood. Check it out on your lunch break in the City of London during the festival.

“Every single aspect of the installation is tailored to its environment as well as the function it serves. The curves raise up to create backrests and places to sit, as well as space for people to walk under, or pause and find some shade. It walks the line between a craft object and a design solution. It occupies the square without blocking it,” says Cocksedge.

Established in 2008 as a vehicle for the designers, companies and institutions situated in the East End to collaborate on the promotion of their activities during the London Design Festival, Shoreditch Design Triangle has grown to now comprise over 60 different independent events, making it the largest official Design District.

SCP will present The Landscape of Symbols, an exploration of our relationship with the unmade world that surrounds us and how it influences the objects that we make and use.

In collaboration with The Modern House, design-led property developer Artform will offer a preview of Hide, its latest collection of apartments hidden behind Hackney Road, including a behind-the-scenes guide from the designers and artisans who created every detail.

Lee Broom will once again transform the Shoreditch showroom to present a brand-new installation entitled KALEIDOSCOPIA – an experiential installation showcasing new and recognised lighting pieces within a reflective environment – this one is made for the Gram.

The London Design Fair will also be taking place alongside the London Design Festival at the Old Truman Brewery from 19-22 September. Visitors get the opportunity to  explore some of the 550 exhibitors from forty different countries before being able to shop around too.

The area is home to some of the most influential contemporary design innovators in the world. With its ancient alleyways and historic buildings bordered by the much-feted Brutalist gem, the Barbican Estate, Clerkenwell was famed in the 18th century for its printing, drinking & thinking.

Now a hotbed of international design, its showrooms and studios specialise in furniture, lighting, kitchens, surfaces, alongside its large population of architects busy shaping the city.

Viaduct will celebrate 30 years in business by taking a look into the future with Waste Not Want Not. Featuring contributions from E15, Maruni, Mattiazzi and Nikari among others, the exhibition will feature a series of workshops and talks which question elements of our lifestyle today, with a focus on how materials can be used, how products are consumed and the importance of inclusivity within communities.

Musicity x Low Line invited sound artists to compose tracks in response to buildings and spaces along the mighty Victorian railway viaducts which form the Low Line. Spanning Bankside, London Bridge and Bermondsey, the 15 site-specific geotagged tracks can be streamed and downloaded for free in the spaces which inspired them. They have done similar work with Sculpture in the City too.

Tate Edit will unveil PLANTATION by Alicja Patanowska alongside a series of interactive workshops in Tate Modern while The Africa Centre will explore how design and architecture can be informed by African and diaspora thought and sensibility.

Other highlights include the iconic Oxo Tower Wharf which will showcase the very best in design, craft and innovation from over 25 designer-maker shops and studios. You could spend the entire day just here.