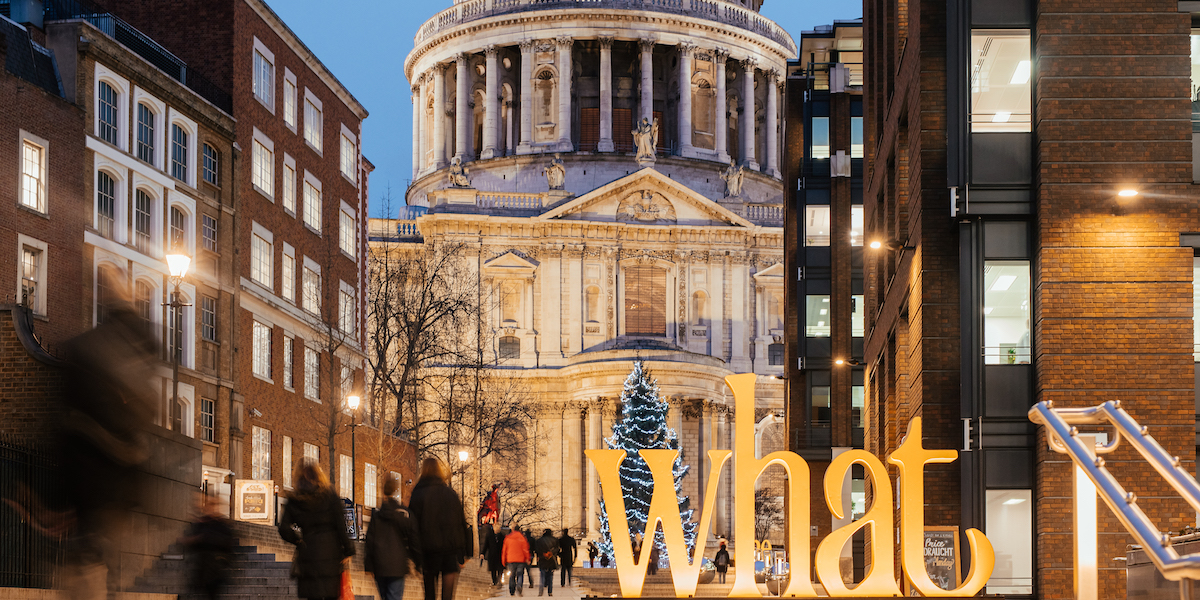 Visitors to London’s Culture Mile – which stretches from Farringdon to Moorgate – will be guided through the streets by a quote from Virginia Woolf’s novel Jacob’s Room: ‘What are you going to meet if you turn this corner?’.

‘Around the Corner’ by Karsten Huneck & Bernd Truempler,- KHBT will start at the Millennium Bridge, with each word of the last sentence located at points along the walk where they act as a wayfinding tool, as well as a sculptural attractor where people will be informed about Culture Mile and the places where it is located.

The installation will be located along the following route:

Virginia Woolf was one of the modernist writers who drove changes to narration in literature. In a time when beliefs regarding ‘truth’ were changing, authors told stories in a way that reflected the fragmented and disconnected world. It was called “stream-of-consciousness narration”, defined by a narrator inhabiting the minds of various characters and depicting thoughts that are experienced both consciously and subconsciously.

In “Jacob’s Room” Virginia Woolf wrote: “The strange thing about life is that though the nature of it must have been apparent to everyone for hundreds of years, no one has left any adequate account of it. The streets of London have their map; but our passions are uncharted. What are you going to meet if you turn this corner?”

‘Around the Corner’ is inspired by the history of London as a whole and 20th Century literature specifically: a time when the City of London was starting to thrive, and many writers focused on the subject of an enigmatic London. The installation seeks to create a new emotional connection that allows the visitor to explore an otherwise overlooked thoroughfare and its cultural destinations. The font is inspired by the very first edition of the book in 1922, directly linking the installation back to the historical periods that inform each corner of the City.

Karsten Huneck (KHBT), said: “We are delighted to be able to create “Around the Corner”, an emotional and imaginative work that is aiming to make people think and discover Culture Mile. The proposal is a continuous journey along the North – South route of Culture Mile that narrates key locations of cultural significance by utilising literature of the early 20th century when many writers focused on the subject of an enigmatic London.

“‘What are you going to meet if you turn this corner?’ a sentence from Virginia Woolf’s “Jacobs Room” navigates the visitor along the route in order to explore the cultural richness of the City. Each word, expressed with a precious golden finish, will be placed at crucial locations in order to create the route. The work also reflects on events of our current time which bear comparisons with the early 20th century where beliefs regarding the truth were changing and authors told stories in a way that reflected the fragmented and disconnected world.”

Catherine McGuinness, Policy Chair, City of London Corporation, said: “The City of London Corporation is committed to the physical transformation of Culture Mile and this includes the important North-South axis between the Barbican and the Millennium Bridge. KHBT’s winning proposal will bring the area to life with its imaginative approach inspired by the literature of the early 20th century. It will help us realise our ambition to create an unrivalled visitor experience and a welcoming environment for everyone to enjoy this cultural and learning destination.”