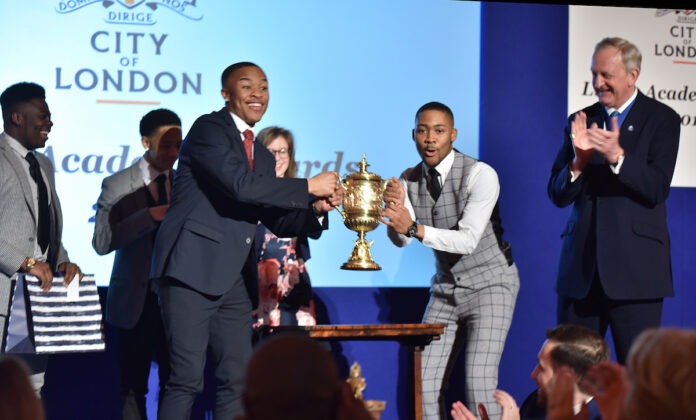 Students from Drapers’ Academy in Havering were victorious in a Dragons’ Den style competition hosted by the Lord Mayor of the City of London.

Like the popular television show, each team had to come up with a commercial business idea and present it to a panel of high profile judges.

The winning idea involved the creation of a subscription service for period and sexual health products called In The Box.

The competition was set up by the Grocers’ Company in 2013 and has since been extended to include Drapers and Haberdashers. And this year, preliminary events were held in venues across the City.

The awards gave students a chance to develop their business skills by taking part in a series of practical tasks.

Henry Colthurst, chairman of the City Corporation’s education board, said: “The Livery Awards provide a unique opportunity for students to learn from businesses, visit traditional parts of the City, and then showcase ideas, innovation and skills to live audiences.

“Through the education board at the City of London Corporation we are playing an important role in developing London’s future workforce, and teaching the skills which enhance employability.

“Congratulations to all the schools that took part and, of course, to the Drapers’ Academy for winning the competition.”

Lee Bryant, head of sixth form at Drapers’ Academy, said: “Our students have grown in confidence over the course of the event and have gained a number of skills including public speaking, a skill which will stand them in good stead for the future.

“We are thankful to the various livery companies and the City Corporation for giving us this opportunity, not just to our students but to all young people from the schools that took part.”

Teams were supported by their teachers and two mentors – often young members of the host livery company – who provided financial and creative advice.

The local authority sponsors or co-sponsors 10 academies across Hackney, Newham, Islington and Southwark.

In 2017 and 2018, Sutton Trust named the City Corporation as the UK’s best academy sponsor for empowering pupils from disadvantaged backgrounds to perform above the national average, and the leading academy sponsor for Progress 8 and Attainment 8, which track pupil progress and achievement.