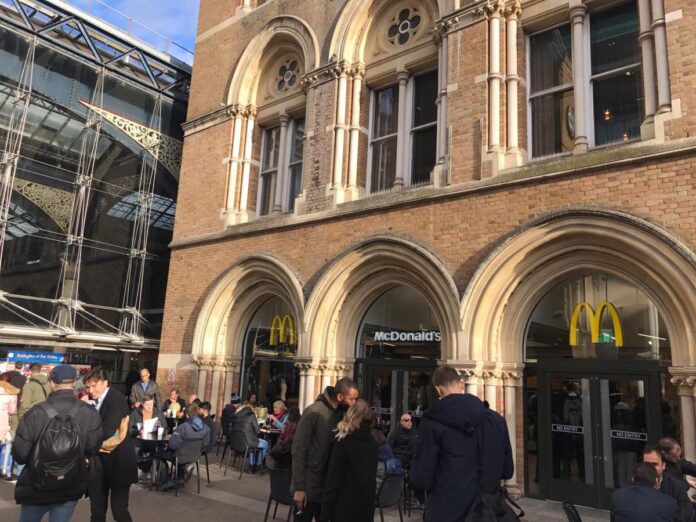 There have been so many violent attacks by drunken customers at Liverpool Street Station’s McDonald’s it has had to hire bouncers.

Police red-flagged the fast food restaurant after 14 cases of serious violence in just six months, mostly committed by drunk customers seeking a late-night snack, a report to the City of London Corporation said.

British Transport Police recorded crimes including one case of grievous bodily harm, one of actual bodily harm, one assault on emergency staff, one instance of affray, one of race or hate abuse, and nine common assaults at the McDonald’s between 1 March and 31 August this year.

A licensing report for City leaders said the McDonald’s outlet had employed door staff and was limiting the number of customers allowed in at a time as a result.

It comes as police put more boots on the ground at the busy station in an effort to keep a lid on bad behaviour.

The City’s licensing authority has listed the McDonald’s in its ‘red zone’, meaning it is at risk of undermining licensing objectives, and the franchisee is required to take immediate action to improve immediately or its licence will be at risk.

A spokeswoman for the McDonald’s franchisee said they were working closely with police, rail authorities and local charities to work on being a safe spot amid the area’s busy nightlife.

“Creating a safe environment for both our people and customers is of the utmost importance to us,” she said.

“Our people are provided with training to ensure they feel comfortable, confident and equipped to provide both the best possible customer experience and best support to the local community, and our decision to have security guards in place is part of our efforts to ensure the safety and security of all.”

British Transport Police figures show 325 crimes were reported at the station by September this year, compared to 494 in 2017.

Police at the station have stepped up their patrols and crime has dropped by 16% compared to last year, chief inspector John Loveless said.

“We know that antisocial behaviour can be intimidating for both passengers and rail staff, and we are working hard to put a stop to it – particularly during the festive period,” he said.

“We are aware there have been challenges in relation to antisocial behaviour, in particular areas of Liverpool Street Station.

“As part of our work to crackdown on this behaviour we have been working closely with businesses to improve the safety of the environment, including introducing door staff and better queuing systems where needed.”

The City is also monitoring how the area was coping with nightlife challenges.

A spokeswoman said: “We work closely with our policing partners to ensure that the Square Mile remains a safe and enjoyable place for everyone.”

It’s not the first London McDonald’s to be forced to come up with ways to handle drunk and aggressive customers during night shifts.