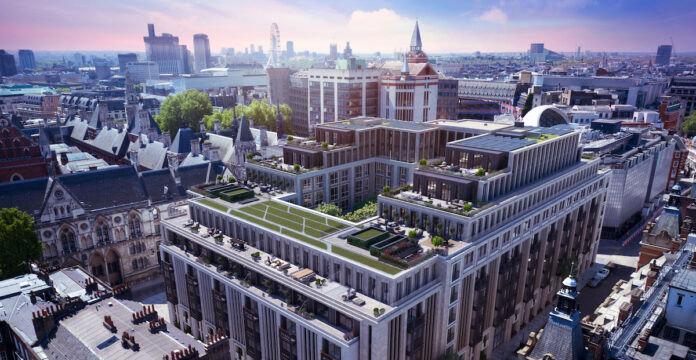 Residential properties like this don’t come around often. In fact, it’s almost impossible to find a new luxury development on the market in such a central location.

Lincoln Square lies on the cusp of the City of London and Covent Garden, sitting right behind the Royal Courts of Justice. Living here gives you prime access to all the best bits of London – for work and pleasure.

Just imagine your weekend: waking up to the slow rumble of the City beneath, grabbing a coffee and croissant at one of the nearby boutique cafes, and then taking less than a five-minute stroll to the British Museum for a little cultural expedition. Head back home to relax in the building’s spa and lap pool before heading out again to some of London’s top dining destinations. This is the epitome of luxury living.

And all of this surrounds a huge central courtyard, created by Gustafson Porter + Bowman. Viewed from many of the luxury apartments, the tranquil outdoor space will be planted with flowers and flora each season, along with perennials and trees that will grow alongside the community of Lincoln Square.

But take a step outside and admire the design of the development, too. The residences at Lincoln Square reflect the grand architecture, atmospheres and traditions of Lincoln’s Inn Fields, the Honourable Society of Lincoln’s Inn, and the dynamic and changing Fleet Street and Aldwych. It’s a blending of both old and new. Traditional and modern.

Taking inspiration from the local culture and institutions of world importance, such as Sir John Soane’s Museum, the interiors also provide an elegant, warm and contemporary backdrop for residents – a showcase of intelligence.

Lee Polisano, president and founder of PLP Architecture, notes: “Our design represents an illustration of how contemporary architecture can complement an area with a strong heritage character through attention to classic devices such as craft and proportions.”

And the Spanish designer Patricia Urquiola goes on to say: “Our vision for Lincoln Square is characterised by our trademark mix of different materials. The use of coloured glass, wood, marbles and steel creates beautiful light effects and a cosy yet sophisticated atmosphere.”

Lincoln Square is right in the thick of it. The Holborn residences are just a quick stroll away from the River Thames, the West End and the Square Mile. Everything is literally on your doorstep. We’re already jealous of those who nab up these spots.

And it’s not just about the current cultural offerings either. So much has happened around here. The surrounding streets’ rich and colourful history has inspired the greatest British writers, including Shakespeare, Dickens – who was a resident of the area – and Pepys. It truly is London’s literary and intellectual heart.

Talking of intellect, Lincoln Square also sits within walking distance of many of London’s finest and oldest educational institutions. London School of Economics is located just on the doorstep of Lincoln Square.

King’s College London, the fourth oldest university in the UK is just five minutes away, while University College London in Bloomsbury is just 20 minutes down the road. A number of London’s best primary and secondary schools, such as St Paul’s Cathedral School, and City of London Schools for Boys and Girls, are also within easy walking distance.

And, being so central, you’re spoilt for choice in terms of transport links. It’s just too easy to get around the City from here. But that’s if you can even tear yourself away from the local area, or luxurious indoor pool and spa.

Prices start from £1.29million for studios, £1.5m for single bedroom apartments, £2.2m for large two-bedrooms, while the ultimate penthouses are also still up for grabs.

For any enquiries, either call the sales team on 020 7004 0910 or send an email to [email protected]. You can also check out the site for yourselves at 18 Portugal Street WC2A 2JE.