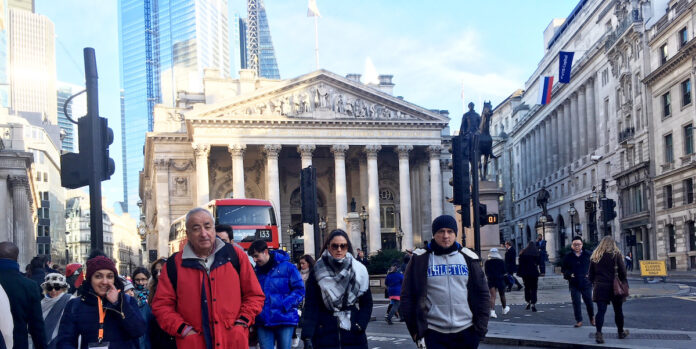 The future of the City’s Royal Exchange could be a risk unless it is given a power capacity upgrade, a report has said.

The Grade I-listed luxury shopping and dining destination, opposite the Bank of England in Threadneedle Street, needs an increase in electrical supply or its “life and viability” could be at stake, it is claimed.

A planning application for the 448-year-old Exchange by its owner Oxford Properties Group Ltd said: “There is also a need to increase the building’s electrical supply in the long-term, as it is currently at capacity.

“In turn, the life and viability of the Royal Exchange depends on these restaurants and retail units, and to do nothing is not therefore an option as it would threaten the long-term viability of the building.”

The Italian Renaissance and Baroque-style attraction is also referred to as “one of the most important historical and iconic buildings in the City of London”.

The plans also say: “[There is] no other alternative but to insert a new UKPN room to maintain the Royal Exchange’s prestige and status… and cope with rising demand, and attract quality tenants.”

The current Royal Exchange building was opened by Queen Victoria on 28 October 1844. The original building, opened in 1571 by Queen Elizabeth, was destroyed in the Great Fire of London. The second incarnation of the Exchange was burnt down in another fire in 1838.

It holds 39 retail units, many of them designer fashion brands, over four floors around a central courtyard.

The planning decision is due to be made in May this year. Oxford Properties Ltd made no further comment.