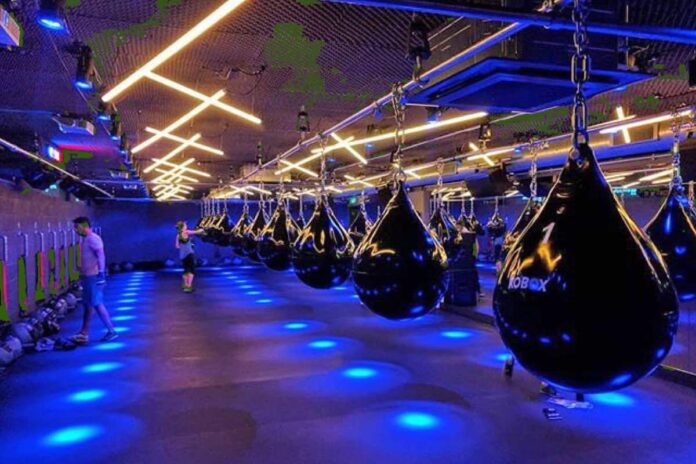 THE East End’s mean streets might be the spiritual home of boxing in this country, but a new breed of studios are giving the sport a boutique makeover for the masses; think protein shakes and subwoofers rather than spit ’n’ sawdust.

Kobox is one such fitness studio, delivering a Fight Club-worthy workout in a nightclub setting – a combination that has had the Chelsea set lining up to go 12 rounds ever since the brand launched on Kings Road in 2015.

Now it’s the City’s turn to head into the ring – or more specifically, a neon-lit, subterranean studio at the top of London Wall – where they’ll find a fast and furious workout delivering rapid fat burning and stress relief in the ultimate one-two punch.

What is it?
A high-intensity boxing-based workout that gets you fit, not hit. Former Barry’s Bootcamp trainer Shane Collins developed the concept after training elite boxers in strength and conditioning and discovering his own fists of fury.

“I was a track runner – no boxing background whatsoever – but I fell in love with it and dropped everything else, which got me thinking: ‘There must be other people out there who will do the same if we just make it more accessible’.”

Accessibility meant simplifying the routines, adding strength and conditioning components, tricking out the studio with slick interiors and a nightclub-standard sound system, and reducing the chance of any broken noses by keeping punches aimed at the joint-friendly Aquabags, rather than other members of the class.

“We wanted to do what Soul Cycle did for spinning and what Barry’s did for running; it’s just taking that fear factor out of the equation.”

How does it work?
Each 50-minute session is split between high-intensity bag drills and strength and conditioning, essential, we are told, for maintaining speed and agility in the ring.
It’s leg day when we visit, which means trainer Amy – a media advisor who caught the boxing bug and now competes in amateur matches – is doling out a brutal combination of squat jumps, pistol squats and sprints.

When we do strap on the gloves, it’s a punch by numbers approach where jabs, hooks and uppercuts are assigned a number and combinations are helpfully projected on the wall so you can focus on form. Sequences are fairly easy to get the hang of, but if in doubt just whack the bag.

What are the benefits?
Few workouts can lay a glove on the cardiovascular, calorie-burning benefits of a high-energy boxing workout. A Kobox class will improve circulation, strengthen and lengthen your muscles, and increase stability and co-ordination. And that’s just the physical side of things.

Boxing is also a rapid stress-reliever, as anybody who has dreamed of punching a demanding boss or irritating coworker in the nose would be aware.

“The City is a very tough market to break but of all the fitness genres, boxing makes a lot of sense,” Shane says. “Obviously there are a lot of high-powered, demanding jobs, and punching a bag is a great outlet for that stress.”

How much?
Beginners can start off with two classes for £25, after that it’s £20 for a single, or £150 for a series of 10. Kobox City has also just launched exclusive 30-minute express classes that fit snuggly into your lunch break at £12 each.