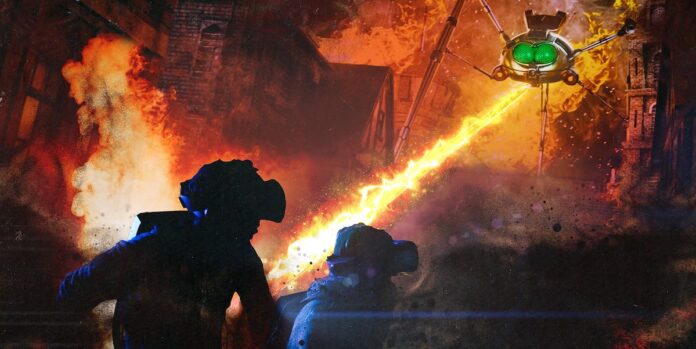 Totally immersive experiences are so hot right now – and the new War of the Worlds Experience is the pinnacle. The team behind the experience have created a labyrinth of theatrical sets which place visitors right in the middle of a martian invasion in 1898.

You and a team of no more than 12 people band together to survive the many battles to come, running through dark cobbled streets of London full of thick fog and ominous rumbling sound effects.

Actors will come in and out of the story to take you from one stage to another, building up tension and anxiety about what is to come. We can admit that we were slightly terrified from the very beginning. Especially when you and your group are left alone in a room full of holograms retelling the horrors of the past and giving dire warnings of possible futures.

This all happens while Jeff Wayne’s famous musical score fills each room.With these tunes following you throughout the experience, you really feel as if you’re on a proper quest to escape the invaders.

But it’s not all high-tech holograms, actors and carefully created sets. They also manage to incorporate a huge amount of virtual reality. One moment, someone spontaneously combusts in front of your very eyes, and as you run away, you’re told to put on a virtual reality headset and a backpack.

You’re then instantly transported into a cartoonish world, surrounded by your fellow comrades (all made to look like a typical character from that time) as well as artificial personalities who take you on a journey around the British countryside, underground in the sewers of London, and on to alien space ships.

As you walk around the real world, you also experience the virtual one – all the while gusts of wind hit you, immersive smells flood your senses and invisible people actually touch you.

At times, you’re even left alone, without any actors in the room and have to fend for yourself. The lights go out, the ground shakes and the sound of distant screams echo around you. You can’t help but let out a few squeals.

Fortunately, to let your heartbeat return to a normal pace, they break it up with a 20-minute interval in the Red Weed bar. We very much appreciated having a beer in the middle of an alien invasion, but it did feel like they were just trying to squeeze some more money out of us  – especially as you pay over £6 for a pint.

But you don’t have to drink. You can simply wander around the bar, listening to the extended version of Jeff Wayne’s The Red Weed and prepare yourselves for more fear and excitement.

We won’t go into too much more detail about the rest of the experience (because you should be properly surprised), but if you’re to get the most out of this, you have to properly play along with everything.

Don’t simply stand back and giggle at dying actors – step in and interact with them. They are improv pros and want you to get involved. They’ll even prompt you to do so. It’s all immersive. The deeper you dig into the experience, the more fun you’ll have. Don’t hold back – the Martians certainly won’t.