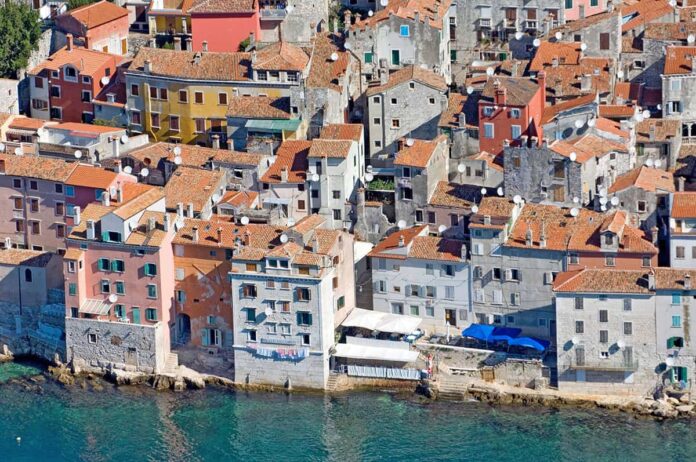 Between the fan frenzy kicked up by TV smash Game of Thrones and the emergence of Hvar and Split as must-visit destinations for those consumed by wanderlust, Croatia has worn its crown as King of the Adriatic with pride for the last decade.

But away from the slanted terracotta roofs of Dubrovnik, made famous by Queen Cersei’s shameful naked march through the streets below, and the stags and hens on party island Hvar, there exists a Croatia less trodden by the tourist masses.

A heart-shaped peninsula on the northern end of the Adriatic coastline, Istria is Croatia’s perfectly formed gem. Offering three of the country’s most attractive coastal towns in Pula, Rovinj and Porec, it is rich in culinary treasures, history and culture – a certified triple threat.

It is this treasure trove of antiquity that has caught the attention of the aviation giants, with weekly flights now making it that much easier for all of us to bask in the glow of 445km of pristine coastline, hidden corners, preserved natural surroundings and gastronomic pearls in truffles, olive oil and wine.

Situated furthest south is Pula, once Istria’s main ports and today making a name for itself as the liveliest town in this part of the world.

Liberally dotted with ancient monuments, along with its vibrant main square, Pula is proudly home to one of the best-preserved amphitheatres in the Roman world.

Built in the first century it is the sixth largest amphitheatre to have stood the test of time, and plays host to concerts as well as the annual Pula Film Festival.

Home to perhaps Croatia’s most picturesque coastal destination, Rovinj is lined with Venetian-style houses, a harbour sprinkled with fishing boats, and the St Euphemia Cathedral, whilst further north in Poreč stands the sixth-century Euphrasian Basilica, a UNESCO World Heritage Site and one of Europe’s finest intact examples of Byzantine art.

Travelling higher on the west coast guests will be greeted by the irresistible charm of Mediterranean fishing town Novigrad. An architectural find, it is home to the earliest Roman crypt in Istria, along with the opportunity to visit the Savudrija lighthouse – the oldest in the Adriatic.

Inland there’s Motovun, situated on a hilltop and certainly worth the climb to be greeted by a quaint square overlooking the truffle-rich forests of the Mirna Valley. Reputed to be the smallest town in the world, Hum is home to just 20 inhabitants – perfect for lonely wandering – a parish church and a graveyard.

For somewhere with a bit more life but still quiet enough to peruse the pages of George RR Martin without disruption check out Labin and its Instagrammable narrow streets.

Abundant in nature and home to a unique national park the Brijuni Islands are the largest group of islands in the Istrian area. A special marine reserve since 1980, Lim Fjord is a legally-protected geomorphologic and hydrogeological site making an ideal cycle or walking route, while for seclusion, idyllic beaches and untouched nature there is Kamenjak Natural Heritage Park located at the southern tip of the peninsula.

Proudly boasting some of the world’s best olive oils, Istria has been awarded the Best Olive Oil Region in the world for the last three years in the prestigious Flos Olei Awards. It is a tradition so rooted in family history that families still hand pick the olives themselves today.

And oenophiles will rejoice when discovering that the trademark of the Istrian identity is their wine. Indeed, the density of winemakers across this small peninsula – more than 100 at the last count – ensures a menu that leaves visitors spoilt for choice.

In addition to being award winning, the local wine cellars are usually a family business each with their own unique story rooted in tradition and history they invite their guests to discover.

There is certainly no chance of winter coming to put Croatia in the shade any time soon.