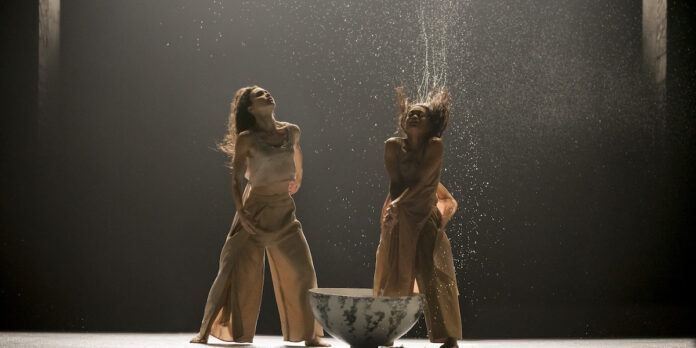 The Barbican Centre is hosting an homage to the iconic dancer, Isadora Duncan, who changed the face of modern dance back in the late 1800’s and early 1900’s. And the Viviana Durante Company are taking ownership of the hefty undertaking.

Isadora is known for making dance ‘ugly’ and more honestly expressive. She danced how she felt – be that joyous, sad or infuriated. Nature and her inner self were her twin muses.

She is often described as a timeless feminist icon who made work that enabled women to express themselves physically on their own terms. All of these aspects of modern dance are celebrated in the Barbican Centre’s triple bill.

The first half kicks off with Isadora Duncan’s own choreography, Dance of the Furies (1911), which is this almost demonic and animalistic performance showing off the experimental and unattractive side of her creations. This was incredibly controversial at the time Isadora first performed it – female dancers were meant to be angelic and pure at the time.

The Furies come out on the dark stage, stained red by light as they crawl and scratch their ways around. You can see how the almost demonic performance could have been inspired by World War One events.

This is followed by a starkly different performance. Five Brahms Waltzes in the Manner of Isadora Duncan by Frederick Ashton is a one-woman dance which is meant to be free and joyous – embodying the character of Isadora who was known to have often an infectious sense of joy on stage.

This was meant to be performed by Viviana Durante herself, as she returned to the stage, but she has been injured and is unable to dance for the rest of the performances. This was a mighty shame. Begoña Cao did a brilliant job at filling in but it did feel less effortless and more choreographed than it was intended to. Isadora made moves feel free and natural. She just seemed to move effortlessly on stage.

READ NOW: Death of England over at the National Theatre

This performance, however, felt a bit forced. It doesn’t mean it wasn’t a delight to watch. Begoña Cao is an exceptional dancer after all. But we can only imagine that Viviana’s version would have been lighter and more emotive – better celebrating Isadora’s famous technique and character.

The triple bill culminates in a 40-minute performance highlighting just how far modern dance has come thanks to the likes of Isadora Duncan leading the way so many years ago. Unda, choreographed by Joy Alpuerto Ritter, is nothing short of sensational.

It isn’t rigid or meant to be in perfect synchronicity. Each dancer has their own natural movements. Their own ways of expressing themselves. These women are able to dance together with such precision without losing their own self. Unda is choreographed to let all that stand out.

At the same moment, one of the women moves with hurried and almost erratic movements while another flows and slides slowly. One smiles, while another grimaces. This is all brought together with intense music, led by Lih Qun Wong who plays the cello live – occasionally singing and gasping into the microphone.

We never thought 40-minutes of pure dance could be so mesmerising. You should come to Isadora Now: Triple Bill even if it is just for Unda. It brings everything that Isadora Duncan symbolised together in one explosive performance full of passion and energy.