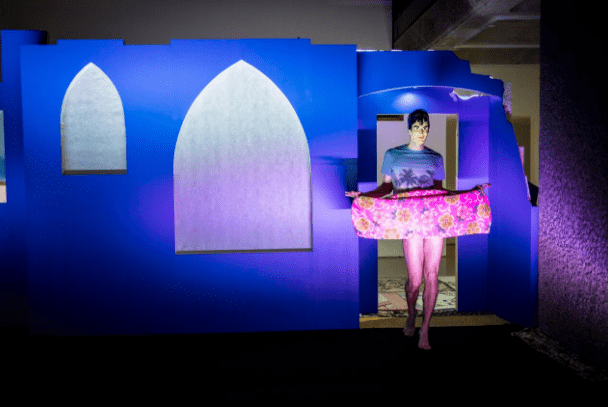 TWO dancers, clad in black, strut back and forth against the stark white walls of the Barbican’s Art Gallery locked in what appears to be a war of the poses.

One is throwing the highly stylised shapes of the voguing ballroom scene in 1960s Harlem, the other the minimalist movements pioneered by experimentalists of postmodern dance operating out of Judson Memorial Church in Greenwich Village.

But the Barbican’s latest performance exhibition Hoochie Koochie goes well beyond the dance battle tag; rather it is US choreographer Trajal Harrell’s re-imagination of historical dance scenarios to explore concepts of spectacle in performance, race, gender and identity.

“What would have happened if one of these Harlem voguers ventured downtown to the village to perform alongside the early postmoderns?”

he ponders in Twenty Looks or Paris is Burning, his best known series and one of his 14 works brought together for Hoochie Koochie.

It’s probably not a question that has crossed the minds of many of the patrons gathered at the exhibition launch last week, but one we are suddenly eager to know the answer to as the up-towner’s flamboyance and the down-towner’s everyday movements play off one another despite being worlds apart.

All the while, similarly fictional encounters are unfolding around the gallery, like a meeting of early modern dance pioneer Loie Fuller and Tatsumi Hijikata, the founder of Japanese dance theatre style butoh for Caen Amour, inspired by the seductive, belly-dance like shows of the late 19th-century hoochie koochie genre.

The 15-strong ensemble of dancers perform up to four of these activations at any one time throughout the exhibition’s month-long run of six-hour time slots from Thursday through to Sunday. It is an undertaking that even Harrell, fresh from a two-year residency at New York’s Museum of Modern Art, admits is “a big deal”.

“I was quite shocked when they invited me to do a show in such a big space,” he says.

“It is quite rare, and daring and courageous to put this many dancers into the same space at the same time.”

The terms “daring” and “courageous” have often been used to describe Harrell’s work over the years, so it’s difficult to view Hoochie Koochie as firmly rooted in the past. Harrell describes being in the exhibition as “a bit like time travel”.

“One of the really exciting aspects of a performance exhibition of this scope is that the work born in the past comes alive in the future,” he says.

Performance is, in fact, only of the now. So in this incredible context of Barbican Art Gallery, this is, truly, something only of this moment.”

Trajal Harrell: Hoochie Koochie is on at the Barbican until 13 August.