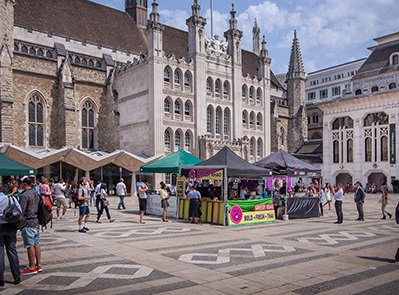 A popular food market is returning to the heart of London.

The market’s return signals the next step out of lockdown for the business district which normally welcomes 500,000 commuters every weekday.

It offers international food with stalls selling a range of cuisines including French, Jamaican and Greek meals.

The lunch market stopped during lockdown and Guildhall Yard has been used as the venue for a Covid testing centre – with tests even carried out on Christmas Day last year.

The first market is on June 23 and follows the reopening of the Guildhall Art Gallery.

An exhibition marking the art and style of playwright Noel Coward is due to open at the gallery on June 14 and run until December 23.

It marks the 100th anniversary year of Noël Coward’s West End debut as a 19-year-old playwright who penned classics including Private lives and Brief Encounter.

It aims to showcase the enormous impact that he and his creative circle had on the fashion and culture of his time, and how his legacy and influence still resonate today.

NOW READ: Watch the Euros up at the Skylight’s massive rooftop

Pre-pandemic the lunch market  proved a popular event with office workers queuing up to enjoy lunch in front of the historic 15th Century Guildhall.

The return is one of the next step’s of the recovery plan for the City.

Earlier this spring the Corporation launched a long-time economic and marketing plan to help boost business and consumer confidence in the area after lockdown.

The City Corporation has been encouraging some of the 500,000 commuters to the area to enjoy a range of attractions in the yard in recent years. They include open-air cinema and early morning yoga.

The Yard is also on the site of a Roman amphitheatre and is the starting point for the Lord Mayor’s State Coach during the annual show in November.

Hundreds of Londoners, including London mayor Sadiq Khan recently gathered there to pay tribute to Saskia Jones and Jack Merritt who were fatally stabbed during the London Bridge attack in 2019.