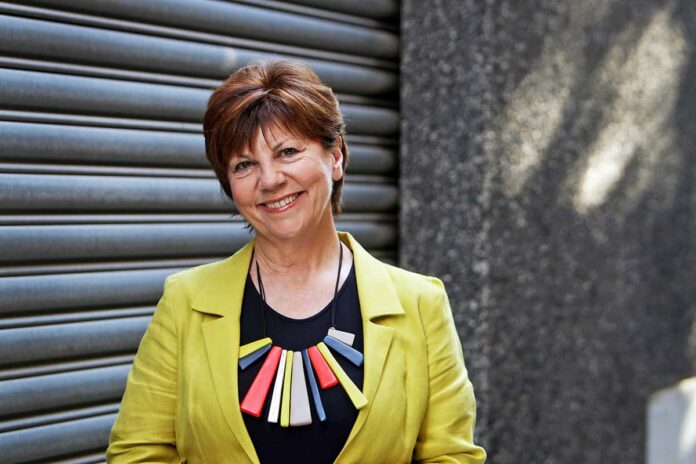 Guildhall School of Music & Drama principal Lynne Williams has a few key takeaways from her first year in the top job.

The first is that she will probably never be able to find her way around the Barbican complex without walking into a broom cupboard, and the second is that City fashions involve a lot more “velvet, lace and bling” than she had anticipated.

“And that’s just the men’s attire,” she quips with a wry smile.

Finding a balance between those dual responsibilities as an educator and as a chief officer of the City of London Corporation, the school’s principal funder, has been one of the major challenges of the first 12 months for the Australian (inset), who hails from the beachside city of Wollongong, south of Sydney.

“Being passed a ‘loving cup’ (an ancient livery tradition) at a banquet full of people in robes was quite surreal.

“In the first year you do hit the ground running; you rush at everything, you’re trying to get to know everyone and trying to understand the many facets of this job, attend all the committee meetings… but I think after 12 months you get a sense of where your energies need to go.”

Going forward those energies will be devoted to developing and implementing a new strategy and vision for the school following the departure of its long-term principal Barry Ife.

“The reputation of the Guildhall School is amazing internationally, so it wasn’t as though I was coming into the Wild West – but I think there is always that chance to look at it while you’re outside the jam jar looking in, and see what you think needs to be reviewed, rationalised.”

Central to the strategy will be an attempt to redefine the concept of a conservatoire in the advent of new technologies and platforms, cuts to creative subjects in schools and, of course, Brexit – but more on that later.

“A 21st-century conservatoire has to be relevant to the demands of the industry, but also trying to get ahead of the game because we just don’t know where the performing arts is going.”

But with more than four decades’ experience in the industry, Lynne is well-positioned to make an educated guess. Prior to joining the Guildhall School she spent nine years at the helm of Australia’s National Institute of Dramatic Art (NIDA), and before that led on the development of the culture, ceremonies and education programme for the London Olympics.

The former classical singer, who trained at the Sydney Conservatorium before moving to the UK, was planning to retire to her beachside home when her “dream job” for the Guildhall School came up.

“I was travelling to London for NIDA and thought I’d throw my hat in the ring… three days later I had this job that brings my theatre and music experience together – I’m a very, very lucky girl.”

Still, how to make her mark on an institution that, under her predecessor, had already hit a number of high notes, including a “world leading” status for teaching, and the associated £4million per annum funding boost, from the Higher Education Funding Council for England?

Lynne says that while the focus has been on shoring up the funding model and re-establishing partnerships with professional institutions like the Royal Opera House, the London Symphony Orchestra and the Barbican Centre, the goal now is to capitalise on this success for the future.

“The reputation is up there but the reason so many people want to come here is because we sit within one of the world’s great art centres,” she says, the Barbican Estate’s iconic towers clearly visible from her office window.

“[Our students] have those opportunities to do side-by-side performances with the LSO, courses in association with the Royal Opera House, and we’re looking at building that up with the Globe and the National Theatre.

“We need to develop that sense of the high-level partnerships we can have and what being a part of the City really means.”

A handful of these partnerships were solidified last year with the announcement of the Culture Mile, the Corporation’s plan to transform the area around the Museum of London and Barbican into a hub of arts and culture to rival that of Southbank and the West End.

However, there are no shortage of challenges facing Lynne and her team, starting with the uncertainty around Britain’s decision to leave the European Union and what that means for the 170-odd EU students currently enrolled at the school, as well as prospective applicants.

Before the referendum, the school released a striking pair of photographs comparing its young symphony orchestra with and without EU students, 49 from the 109 in total.

Barry Ife told the Guardian that the immediate aftermath of the referendum had felt like “a death in the family” among staff and students, and that economic implications aside, the result was “a public relations disaster”.

Eighteen months on and, like most of the country, Lynne is trying to figure out what comes next.

“I just think it’s really important that we don’t lose those EU students, not just from a numbers perspective, but also from the enrichment to everyone’s programme.

“When you’ve got different people, different ideas, different views, different ways of doing things, it makes a fantastically dynamic environment here for all of us and we don’t want to lose it.”

Nonetheless, contingencies are in place for the “worst-case scenario” – the loss of 17% of the student body – among them plans to diversify the programme to include courses designed to attract a different local demographic.

The school has already begun running electives in commercial music, improvisation, and session playing to broaden the appeal to prospective students that don’t have the technical skills required for more traditional courses.

“You’ve got people out there in their bedrooms and garages who are great musicians, not formally trained but writing, performing, creating,” Lynne says.

“Notation is just another alphabet – we can teach them that – but if they’re truly great musicians and we think they’ve got what it takes, we have to have some courses that will attract and retain them in a way that we haven’t at the moment.”

There are also plans to review the youth programme, in particular working with different schools and the Barbican’s creative learning department to facilitate access to arts education at an early age and provide accessible pathways into more formal training.

Last year Guildhall was one of several specialist arts institutions criticised for the “sky-high” cost of auditioning for drama school as part of Labour’s Acting Up inquiry into class barriers within the performing arts. The school charges prospective students £64 to audition for a place.

Lynne says the school has feelers out to improve diversity, but she is satisfied with the numbers and that the intake is “very international”, particularly within the drama department, which is more likely to be based on raw talent rather than years of professional training.

“Young people see role models in our acting cohort, they can see ‘there’s someone that looks like me, I can do that too’.”

And Lynne is adamant that all students, regardless of background, will have a say in shaping the future of the school.

“We need to be constantly aware that the culture of learning and teaching is changing and to be ahead of that game.

“We’ve set ourselves quite a challenge to really move ourselves into a position where we’re number one in the world… we’re already ‘world leading’ but I would like us to be the best.”