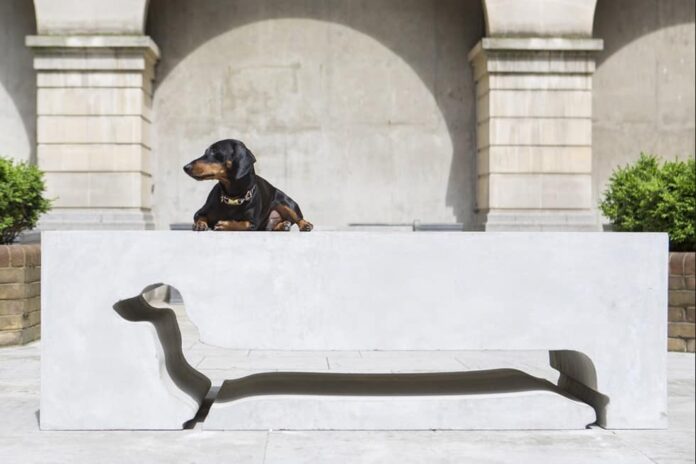 The London Festival of Architecture will make its mark on the City this month with a shimmering mirage of St Paul’s Cathedral suspended above St Paul’s Tube, an architectural cake bake-off in Guildhall Yard, and 10 artistic park benches dotted around Bank and Aldgate.

It’s the type of unique line-up we’ve come to expect from Europe’s largest architectural festival, which is now in its 14th year and attracts more than 400,000 visitors to its month-long programme of installations, events, workshops, talks and walks.

Festival director Tamsie Thomson said this year’s theme of ‘identity’ had inspired “the most diverse and interesting” programme yet, much of it playing out in the City as one of four festival “hubs” hosting over 400 events throughout June.

And while the Square Mile is already home to a melting pot of historic and modern architecture, the City Corporation’s director of built environment, Carolyn Dwyer, said she hoped the spotlight would help to further build its identity outside that of the world’s financial powerhouse.

“The City of London is also a leading cultural destination and we are working hard to create a sense of place throughout the whole of the City and continue to strive to enhance our cultural offer,” she said.

“We very much look forward to hosting the London Festival of Architecture 2018 and to welcoming even more visitors to the Square Mile and to Culture Mile, the City’s creative exchange, at the heart of the City.”

It’s a jam-packed programme so check out our guide to the must-see events:

St Paul’s Churchyard is about to be turned into a construction site but before you get up in arms, remember it’s all in the name of art – more specifically questioning the changing ownership of public space. Landscape architect Sigita Simona has created Building Site on a vast pocket of Carter Lane Gardens to demonstrate the consequences that urbanisation causes to local communities and natural ecosystems. But you don’t need to be wearing high-vis to get beyond these hoardings – in fact, those that ‘claim their right’ to enter will happen upon a magical forest that will host a programme of musical performances and poetry readings throughout the festival.
7 to 30 June
Carter Lane Gardens, St Paul’s Churchyard EC4M 8BX

Morning commuters emerging bleary-eyed from St Paul’s Underground station might be a little startled to find a shimmering sculpture of St Paul’s Cathedral above their heads, just metres away from the real deal.  The installation, which was designed by ScottWhitbyStudio is made up of over 400 mirrored images of the cathedral reflected on hundreds of aluminium poles suspended vertically over the entrance to the station. Venture inside it to find a reflective oculus and dome of poles which have been derived using the same mathematical geometry Christopher Wren used while designing the cathedral’s iconic dome.
11 to 30 June
Cheapside EC1A 4EU

Iconic landmarks will be immortalised in flour, eggs, milk and sugar for the perennially popular competition that pits top architecture and design practices against each other in a battle of the baking mitts at Guildhall Yard. Firms must put their creativity and design skills to the test as they compete to construct some of the world’s most famous buildings entirely out of cake. Last year’s competition saw Rogers Stirk Harbour + Partners claim the top prize with a gingerbread interpretation of their design for the former bullring Arenas de Barcelona, while SOM was awarded ‘Tastiest Bake’ for their hazelnut-infused Bienecke Library.
16 June, noon to 4pm
Guildhall Yard EC2V 5AE

If you’re the type who is accustomed to the best seat in the house, make a beeline for one of 10 new benches popping up in Cheapside and the Eastern Cluster and park your derriere on an actual work of art. The City Benches Design Competition invited budding architects and emerging practices to come up with a park bench design that would enliven the public realm of these rapidly developing areas, while giving the growing population of workers somewhere to sit and scoff their Tesco Meal Deal. Winners were given £800 to turn their designs into functional pieces of public furniture, which the Corporation’s planning chief Chris Hayward hopes will help seat some of the 85,000 additional workers expected to flood into the 1.37million square metres of office space currently under construction in the City.
1 to 30 June
Various locations

Where is all our data? Not the first time that question has been asked over the last couple of months, and it would seem the answer lies within a series of nondescript warehouses and buildings from Aldgate to Clerkenwell. Architectural historian and Dezeen deputy editor Tom Ravenscroft will lead a tour of some of London’s earliest data centres, explaining the key architectural characteristics that make them the most important buildings of the information age. Bookings required via Eventbrite.
5 June, 7pm to 8.30pm
Meet at Branham Street, outside Pret Aldgate E1 8AA