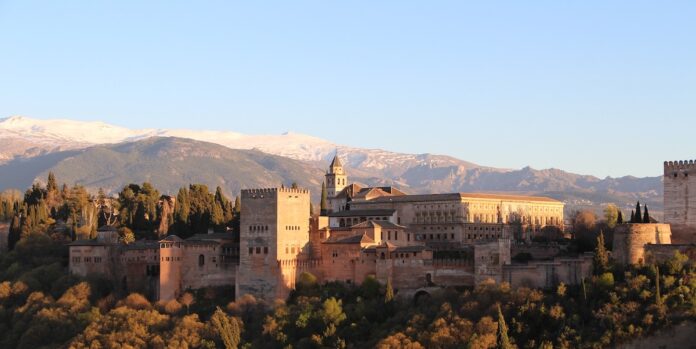 Most visitors are drawn to Granada by way of the enormous Alhambra complex situated on the hills above the city, but know little of what’s happening down in the streets below.

Chow down on some jamón ibérico while sipping on beers in the sun, and then finish off a big night out with a shisha and delicious kebabs. The tapestry of contrasting cultures makes for a really special holiday experience, unmatched anywhere else in Europe.

Granada’s greatest attraction has a vast and turbulent history, much like the city lying beneath it. It started out as a fortress in the 9th century before becoming the residence of the Moorish kings in the 13th century. The Alhambra then became a Christian court in 1492 before Emperor Charles V built the main palace later on.

During the 18th century and part of the 19th, the Alhambra fell into neglect and was to see its salons converted into dung heaps and taverns, occupied by thieves and beggars. Napoleon’s troops, rulers of Granada from 1808 until 1812, converted the palaces into barracks before fleeing the area, leaving the Alhambra to deteriorate even further. It wasn’t until 1870, when it was declared a national monument, that it was repaired and made into what we see today; a proper patchwork monument.

Visitors can wander the ornately decorated complex, marvelling at the mismatch of architecture that exists within the space – again, like the city of Granada itself.

Surrounding the Alhambra are the vast manicured pleasure gardens known as Generalife. Much like the Alhambra itself, the gardens have been rebuilt over and over again, and what we see now are what was left behind by the Christian period of occupation. The large trees, winding hedges, statues, water fountains and small villas are scattered all over the hills. Head here on a hot summer day for peaceful strolls and awesome views over the countryside.

Everybody knows and loves tapas – if you’re not a fan then shame on you; the rest of us can delight in Granada’s perfect interpretation, which is fitting as it originated in this region of Spain. From about 1pm to 4pm and around 9pm to midnight you can head into most bars in Granada, order a beer or glass of wine and bask in the glory of receiving free food as part of the deal. Yes, that’s right people – free tapas.

The Arab Quarter, otherwise known as Albayzín, is a must-see for all visitors to Granada. Upon entering the district, you’ll immediately notice everything change. The paths are different, mostly made from large smooth stones, and it all starts to smell a bit different. Breathe in the incense, spices, shisha smoke, and tasty kebab scent as you wander the maze of stores and restaurants.

Park yourself in one of the small squares, grab a jug of sangria and look out for roaming buskers strumming their guitars and singing to the crowds. And beneath the Albayzín district, you’ll find a small winding street which traces the course of the River Darro, bordered by the old city walls.

Granada is where you can find some of the most authentic hammams in Europe. Head to the likes of Hammam Al Ándalus, Aljibe de San Miguel, or Termas Japonesas for a while host of treatments. But, be warned, these experiences can be quite thorough. You’ll be lathered up in soap, scrubbed, whipped with leaves, rinsed off and sent into a hot steamy room to relax. It might be a bit much for those who fiercely protect their personal space.

Follow an experience like this with a brief visit to the Bañuelo, which is an original Arab bath house which survived destruction thanks to its hidden location under a villa. The hammams were thought of as scandalous by the Christian occupiers who gave them a reputation akin to brothels. Their destruction makes this single remaining monument so special.