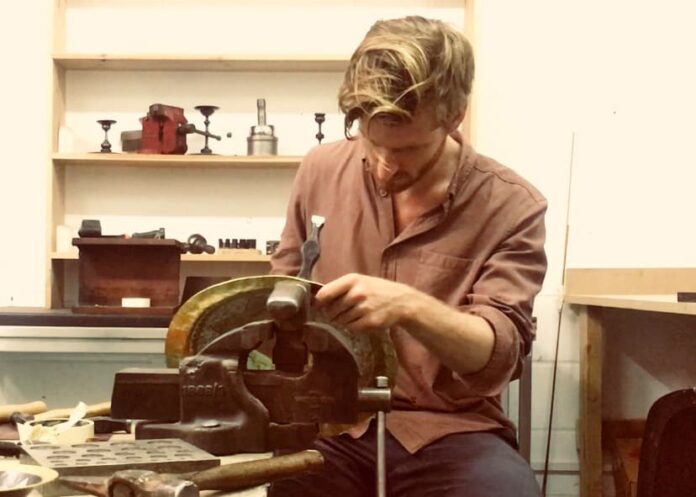 Silversmith Samuel Waterhouse has more affection for the Goldsmiths’ Fair than most – for him, appearing in the annual showcase is vindication for a dramatic shift into a new career.

“I suppose the most interesting thing about me is that I taught myself,” says Samuel, who made the unusual switch into designing and making after graduating from Manchester University with a degree in English literature.

“During my first year at university I had a serious girlfriend, and on one trip back home to Northumberland my dad showed me a spoon that he had made. I asked him if he could teach me how to do something like that because I’d love to make something for my girlfriend.”

That proved a catalyst for Samuel’s passion for crafting treasures with his own two hands, but with only the techniques he could teach himself, time at the bench was precious.

“I’d make anything and everything through the holidays and absolutely loved it – using only the 10 tools my dad had in a box he had collected for a night class at university.

“I finished my degree despite seriously considering leaving it, and as soon as possible I made the move down to London and rented a workshop; working all manner of part-time jobs and making around that.”

The move served as a real wake-up call, one Samuel admits he is unsure how he navigated without major incident.

“My current self is baffled at how naive I was with no idea what I would do with my work; all I ever thought was that it was for a gallery.

“One person who is very important to my development is Lucie Gledhill – also appearing at the 2018 Goldsmiths’ Fair – who owned the workshop I was based out of.

“She taught me a lot, not only in terms of the technical aspects of making, but also the industry and the major things I should be aware of.”

Even with the guidance of Lucie, Samuel had “gaping holes” in his knowledge, and had a casual trip to purchase supplies one day taken him on a different route his journey to appearing at the Goldsmiths’ Fair may have been delayed.

“Quite by chance I was in Hatton Garden in a tool shop when a women stepped in – she had just come from something called the Goldsmiths’ Fair.

“We got to talking, she explained what it was all about, and she said she still had her ticket and offered it to me; I took it and off I went.

“After seeing the fair for the first time I thought ‘this is for me’. Goldsmiths’ Fair is a completely different entity to anything else out there.”

Those gaps in Samuel’s knowledge have been filled in over time as his appreciation for the industry he fell into has grown. But he says there are plenty of positives to be gleaned from “coming in at a funny angle”.

“It’s funny that there are still holes in my knowledge, but it means I am constantly being educated – I am now much more comfortable with the unseen aspects of making.”

The fair is a wondrous occasion, according to the silversmith, who is appearing for the second time after making his debut in 2017.

“I consider my ‘gameface’ my last year of work, making quality, making the best pieces I can so that they speak for themselves and I can enjoy the fair,” he explains.

“I want to come across well to potential customers but in my opinion the work should do the work. Last time out I got to meet jeweller Kayo Saito, who is one of my favourites. The excitement of knowing I was showing next to her meant that my gameface went completely out the window on the day.”

For someone who could have been stuck on the outside having entered the fray in such unusual circumstance, Samuel is vociferous in his commendation of the community he now calls home.

Indeed, he describes a sincere sadness that moves over makers as the stalls are packed away at Goldsmiths’ Hall for another year.

“I love the whole jewellery-making and silversmithing community. During the fair you really get to know each other and it is an incredibly supportive environment – I really mean that.

“One person in particular stands out for me and that is Stuart Jenkins, who was the first voice other than my own that gave me that feeling that I should keep going when my family was questioning what I was doing. He was certainly my first positive reaction and influence.

“After the show you get this sadness that you stop the constant communication you have with the other designers and makers, so I’ll definitely be going around the fair and chatting with as many people as possible. They are always a lovely group.”

As for the Goldsmiths as a livery company, Samuel says its status as a driver of the industry is without question.

Even for Samuel, who as a self-taught craftsman has benefitted from only some of the numerous platforms that the Goldsmiths lay on for gold and silversmiths, their influence is undeniable.

“The main thing that the Goldsmiths offered me wasn’t all the great things that they provide for makers across the industry, it was the fact it was a symbol and the pinnacle of what I wanted to be. For me, the Goldsmiths’ Fair was the most influential stamp of credibility I could receive and to be accepted was something that stopped all the questions about what I was doing.

“It is the summit to aim for and continues to be that; I can’t imagine that not being the case.

“In terms of quality and environment the Goldsmiths’ Fair is the one event to aspire towards and isn’t something I can see being superseded by any other event.”