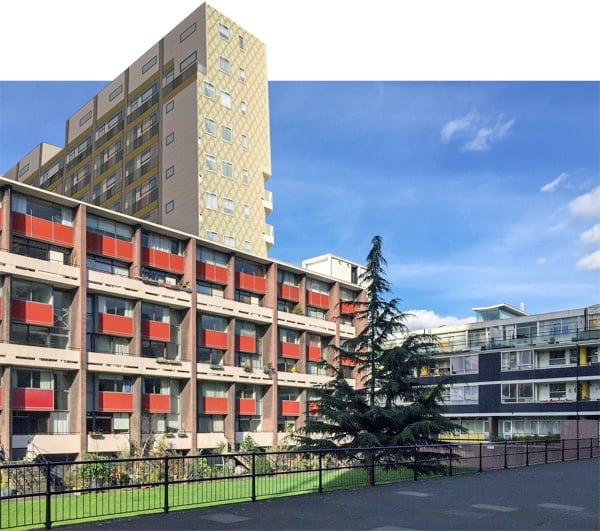 Frustrated residents say they are “fed up” with their concerns over a proposed expansion of the Golden Lane Estate falling on deaf ears.

The estate’s residents’ association (GLERA) is at loggerheads with the Corporation and Islington Council over plans for a new 70-home tower block and 420-pupil primary school to the north east of the listed housing complex on land bounded by Baltic Street and Golden Lane.

Plans are still in the pre-application phase but dominated the agenda ahead of last week’s City Vote, with around 120 people packed into the Cripplegate Wardmote held on the eve of Thursday’s common council election.

There was palpable concern that the 14-storey residential structure in particular would impose on local views and overshadow the rest of the complex.

Steering group sub-committee member Anne Corbett, speaking in the absence of residents’ association chairman Charles Humphries, told City Matters that she and her neighbours have “had enough” of the two local authorities “kicking their complaints into the long grass”.

“You could really tell that people have had enough,” she said after last Wednesday’s wardmote.

“I think that the Corporation is quite surprised by the strength of our protest – we’ve been told that they’ve heard our objections and noted them but it seem as if they keep kicking us into the long grass.”

In the wake of an online petition, which at the time of writing had reached 874 signatures, the Corporation had agreed to review the scale of development as well as the location of the school. But while residents have said that additional social housing is welcome subject to a considered approach, they have rejected any notion of a three-storey school with sports facility being required in their neighbourhood.

“We’ve looked at population projections and don’t believe there’s need for more
places when there is a perfectly good school in Prior Weston on Whitecross Street,” explained Anne.

“We don’t agree with the school or sports hall designs at all – they are ill-conceived.

“As for the residential accommodation, we are all for more social housing but not when Golden Lane as it is now needs redevelopment.

“Much of the estate is listed so special permission is required to make repairs, but nothing ever happens.

“It means the estate office management team get a lot of flack but it is not their fault, it’s the people who are paid to make the big decision not doing their jobs properly. The current problems must be addressed before they start building again.”

Frustrations have been fuelled by the decision to sell-off Bernard Morgan House to private developers in 2015.

Taylor Wimpey intend to redevelop the complex in the near future but no concessions have been made for social housing, something GLERA strongly disapproves of.

But Anne is hopeful that an open dialogue could yet yield a favourable outcome for all parties in terms of the estate’s proposed extension, and insisted that the residents were not just being ‘Not In My Back Yarders’.

“We are a long way from being NIMBYs,” she said.

“We want social housing but want it in a sympathetic way; not squashed in – housing that is of a decent standard and incorporates the design of the estate.”

A Corporation spokesperson said: “No planning application has been submitted at this stage and we are in the process of consulting with residents to address any concerns.”