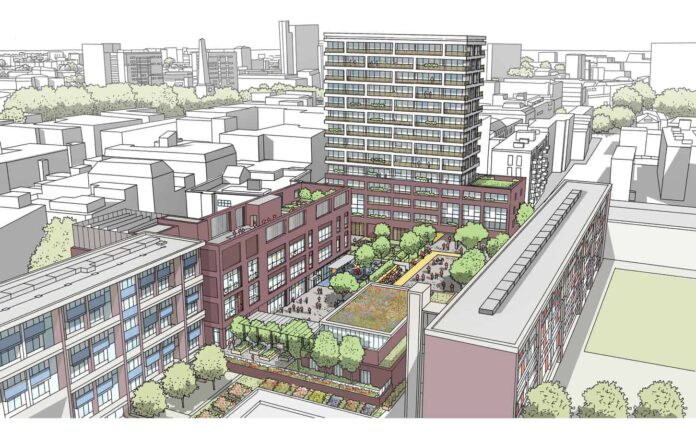 CAMPAIGNING residents have finally been defeated in their bid to stop a new school and imposing 14-storey tower block being built on the Golden Lane Estate.

On 19 July Islington planners cleared proposals for a permanent home for City of London Primary Academy Islington, plus a 66-home tower on the site of the former Richard Cloudesley School.

The development was submitted as a joint application with the City of London Corporation, which gave its own green light to plans earlier this summer.

During consultation a spokesperson for Golden Lane Residents’ Association said that locals were sympathetic to the need for more social accommodation.

But anger over designs not in keeping with the existing Grade II-listed built environment, plus environmental concerns regarding the removal of trees along the eastern edge of the site which line the estate’s allotments – subsequently saved in revised proposals – has fuelled a long-running and bitter war of words.

Tim Godsmark, who is chairman of the Golden Lane Residents’ Association, said a simple redesign could have ended in greater acceptance of the regeneration by residents.

“While we still welcome the redevelopment of the site for social housing and a school this is not a good design because it does not take its neighbours into account.

“We were told that there was a rush to get the school open for autumn this year but the timetable has slipped by a year and there would have been time to listen to the concerns of the community.

“Some of our concerns with this permission have be taken on board in the writing of the conditions attached to the decision but not all.”

A total of 144 objections were filed, as was a petition containing nearly 1,500 signatures opposing the development, with protesters warning the project, which follows approval of a controversial 99-unit private housing block at the other end of the estate, could turn Golden Lane into a “canyon”.

The Islington Council verdict was welcomed by Randall Anderson, chairman of the City Corporation’s community and children’s services committee, who said he was looking forward to the next stage of the project.

He added: “This plan addresses the pressing need for top-class primary education and affordable housing for the local community.”

The two-form entry primary school and nursery will home 420 pupils while housing will be available to both City of London and Islington residents.

The housing element of the scheme will be funded by the City Corporation through a combination of Section 106 payments and Right to Buy receipts. The financing of the school is being handled by the Education Skills and Funding Agency.