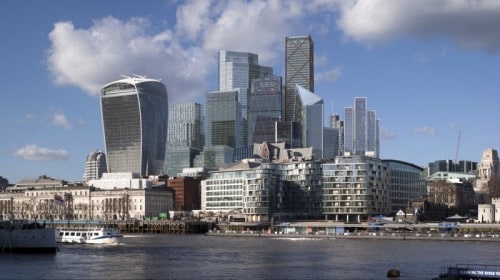 The City’s iconic skyline is emblazoned on everything from marketing campaigns to tourist T-shirts, but a series of developments could soon consign the current look to the archives.

With a total of 13 new schemes consented, under construction or due to start construction in the so-called eastern cluster over the next decade, the skyline will cut a very different look in 10 years’ time.

An ever-growing population of cranes across the east of the Square Mile will deliver an estimated 60% of the City’s growth in the coming years, with projects at 120 Fenchurch Street, The Scalpel, 22 Bishopsgate, 100 Bishopsgate and 70 St Mary Axe all edging closer to completion.

Chris Hayward, Planning Committee Chairman at the City of London Corporation, said that is was unprecedented to see such a scale of development taking place simultaneously.

“There are now more cranes in the City sky than in recent decades,” he said.

“The City’s occupier base is becoming more dynamic, with SMEs and media companies choosing the Square Mile as their home. I am particularly proud that we are able to make available economically inclusive spaces with free public viewing galleries in City skyscrapers.”

Indeed, one emerging trend in new development applications has been the provision of public viewing galleries. Six of the 13 structures will boast public space upon completion.

A shift has also been noted in the pursuit of sustainability.

The City Corporation granted TwentyTwo (22 Bishopsgate) planning permission on the condition that its deliveries are sent to an offsite consolidation centre. This is the first time an office tower has been subject to such a planning requirement, and has been enforced in a bid to reduce traffic and its associated negative effects on the environment.

“Over the next thirty years I expect that we will need to deliver office space for up to 100,000 extra City workers,” added Mr Hayward.

“Therefore iconic buildings such as TwentyTwo will lead the way in ensuring the City remains competitive as a leading financial centre.”