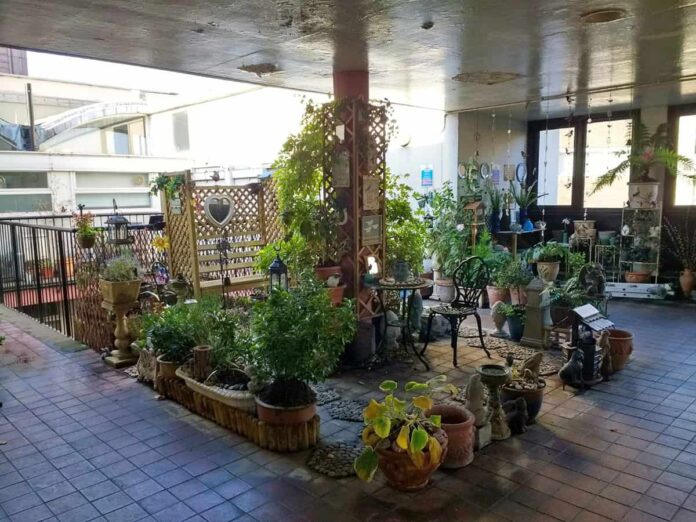 The resident, who cannot be named for privacy reasons, had to be taken to hospital for her own safety during the removal of her lovingly-assembled patch, which was located in a communal area outside her flat.

Removal officers operating under instruction from the City of London Corporation turfed the collection of benches, potted plants and ornaments, deemed a fire hazard, into shopping trolleys as they cleared the walkway. The resident had been tending it for over 20 years.

The woman’s partner, John, 83, was left shaken by the ordeal.

“They just bulldozed their way in and said it’s got to go. We’ve had them for 21 years. It’s been there forever,” he said.

“She was going to harm herself so they whipped her to hospital. She said: ‘You’re not taking my plants’. She tends to those plants every day, it’s a full-time job… She loves her plants, that’s been her life.”

The strict enforcement of fire safety regulations comes on the back of intense pressure in the wake of the Grenfell Tower disaster.

Last week City Matters reported that the Corporation had scrapped its ‘stay put’ policy for Great Arthur House because a review deemed the protocol insufficient for safety.

But resident Bev Bytheway, chair of the Golden Lane Gardening Group, thinks the local authority did not consider the ramifications of their decision to remove the garden.

“Nobody has taken the time to look at the role this garden plays in her life,” she said.

“It’s not just a hobby, it’s completely crucial to her state of wellbeing… I don’t think anyone in the City of London took an expert opinion on the role that garden played in her life and I think the tragedy is that they have just approached it in a very bureaucratic manner.”

She added: “John is in his 80s, frail in health, and he sits in that garden and chats to his neighbours – the garden also has a communal function. The family is vulnerable and I don’t think there’s been any assessment made by the City of London about what the loss of that garden means to the family.”

At the time of going to press the resident was still in hospital. John said he was also worried about his own welfare with his partner away: “She looks after me, I’m a bit of a pest and I take some looking after and she cooks my meals three times a day… Now I’m not getting any support from anybody and I don’t know how long she’s going to be away.”

It has since emerged John had a fall two days after the removal and was himself hospitalised.

On inspection of the rest of Crescent House, there are several plants in the hallway and communal areas. Many residents expressed their fondness of the garden and their confusion at it’s removal.

Edward Oakley, who lives a few doors down says it’s another case of “throwing the baby out with the bathwater”.

“It’s always been a marvellous addition to the block. It’s a wonderful sight when you come out of the lift to see a beautiful garden in front of you… the Philistines who run this estate have had a knee-jerk reaction to a tragedy like Grenfell and exceeded their authority.”

Mr Oakley thinks the City could have compromised. He said: “The City issued a dictum about six months ago saying we had to leave about a metre in the walkways. I can understand that. They could have, if they insisted on having a clear path, just insisted on her just curtailing it. There was no need to remove everything.”

On Monday this week residents held a protest on the site of the garden. Many residents and some from outside of Golden Lane Estate brought flowers and laid them where the old garden stood.

A Corporation spokesperson said that the situation had been evolving over the past 12 months and that the authority had carried out all proper processes to avoid last week’s scene.

“The London Fire Brigade identified the personal property in this communal area of Crescent House as a severe hazard and advised the City Corporation that it must be addressed,” said a spokesperson.

“The City Corporation has spent over a year attempting to engage with the owner of the property, to try and reach a resolution.

“Earlier this year, an order was given in the City of London Court that the resident would meet with City Corporation officers and, within 21 days of that meeting either remove her property as directed by them, or allow the City Corporation to do so.

“The meeting took place but the resident did not remove the items identified and the City Corporation was forced to take action.

“Whilst we appreciate that residents wish to have plants and other items outside their properties, fire safety must be our first priority, and we have no choice but to implement recommendations arising from fire risk assessments and inspection.”

The Corporation was asked to comment on any provisions made for the family with regards to the aftermath of the removal, but declined to make a comment.