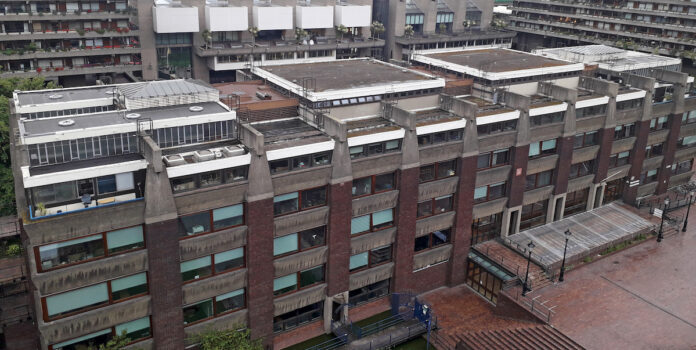 A row has erupted again between a private girls’ school and “horrified” residents of the Barbican estate over plans to build a dining hall beneath their homes.

City of London School for Girls, one of the top 10 in the country, is accused by some residents of gradually trying to expand its primary school and sixth form in recent years.

It sits inside the Grade II*-listed Barbican estate, a world renowned example of Brutalist architecture with the famous Barbican Centre and Roman castle ruins inside it.

In the latest part of an “ongoing saga”, residents are now opposing the school’s plans to build directly under 64 homes in
Mountjoy House, which sits on huge concrete columns.

Mountjoy resident Jan McLean, 78, said: “A lot of people who admire the architecture are horrified, especially people like my husband and I. It’s just vandalism.”

After visiting a public meeting about the plans last week, one resident, who wished to remain anonymous, said: “There will be kitchens. The residents fear that they will get kitchen smells wafting into the flats.

“And there will be added noise because the school will be directly under their homes.

“The estate is densely populated but the architects gave it a marvellous sense of openness by building sections on columns. The trouble with the school’s proposal is that they want to build under one of the blocks.

“The space under the flats is not meant to be filled. That goes against the whole ethos of the place.”

It comes after the 125-year-old school, whose alumni includes singer Dido and Claudia Winkleman, abandoned plans to build classrooms in the estate’s underground car park. Residents also fear the school will attempt to build a new sixth form block on top of a play area.

However, the school’s website says kitchen fumes will be treated to remove smells and directed away from flats. And it said the dining hall will be made of glass “to reflect back the views while allowing light through”.

“The City of London School for Girls values its place at the heart of the Barbican and looks forward to continued collaboration with the community.”

Another resident said the school, which charges £18,300 per year, “creates a furore” whenever it tries to build.

“It’s an ongoing saga,” they said. “They’ve expanded three times and get away with it despite the opposition. But enough is already enough.

“I’m sure the school has lots of plans to expand but they keep doing it in small proposals at a time. It’s stealth tactics and it would destroy the estate one step at a time.”

Ms McLean, a former teacher, also said: “They keep expanding. They want more pupils so they can get more money.

“It will never stop, they will always be vying with other private schools to have the best facilities.”

The school was rated “Outstanding” by the Independent Schools Inspectorate and also receives donations from companies in the Square Mile.