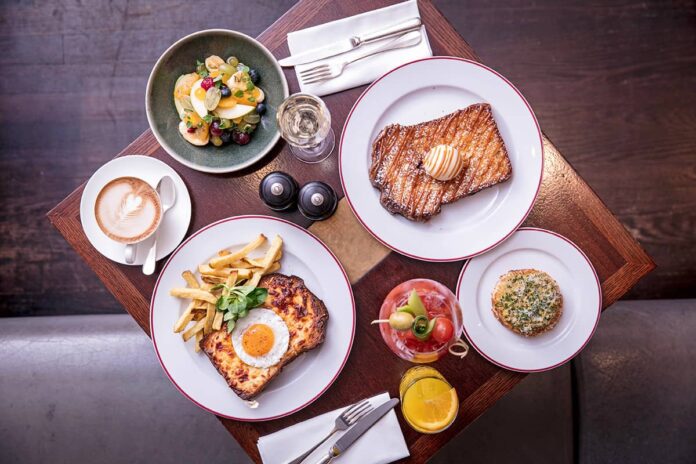 IT has been well over 25 years since Sir Terence Conran took the ground floor of an old tea warehouse at the foot of Tower Bridge and turned it into a French brasserie for the well-heeled picking their way down the then seldom-trod cobblestoned alleys of Butler’s Wharf.

To the uninitiated, little appears to have changed here at Le Pont de La Tour over the last three decades, a period that might as well be three centuries on London’s famously fickle restaurant scene.

There may have been a takeover by restaurant group D&D London, but the venue is still unashamedly grand; gilt-framed mirrors, art deco chairs and blindingly white table linens, and the food continues as fine dining for those who like theirs French and classic.

Of course, the outlook remains among the best riverside vistas in London, albeit with a couple of extra Gherkins, Walkie Talkies and Cheesegraters in the line-up. While it would be easy for Le Pont de La Tour to rest on its laurels (and that view), its latest menu refresh under the leadership of new head chef Julien Imbert injects contemporary nuances to the classics.

“Gone are the crepe suzette trolley and the towering soufflés,” trumpeted the restaurant in announcing Imbert’s appointment in November last year, fresh from a Michelin-starred run as head chef at Broad Street restaurant City Social.

Instead Imbert promised to line the new menu with modern elements that are reflective of French cooking today, while maintaining a foundation of the fundamentals.

For weekend brunch – arguably the best time to take in the views as the weather (finally) gets warmer – this has necessitated a trip back to his childhood in Toulouse, and the cooking of his grandmother Yvette for whom we should thank for his wizardry with French toast.

Instead of using day-old baguette, as was the custom, Yvette would treat her grandson to a few slices of buttery, fluffy brioche dipped in milk and egg and fried in butter; a favour he has passed on to diners either topped with smoky bacon, blueberries and syrup, or salted caramel ice cream.

The starters seem to be where Imbert has allowed himself a few more mod cons; beetroot tartare with whipped goats cheese, pig trotter croquettes with celery remoulade, and poached eggs and avocado on toast, because while we might be in a French brasserie the location (and its patronage) is unmistakably London.

Egg dishes err on the side of tradition, save for the signature scrambled with shavings of black truffle and comté cheese, which, while enjoyable enough, could have gone another round under the grater to make things memorable.

The mains too are mostly classics: a burger, risotto, roast chicken and, somewhat inexplicably given the number of gastropubs in the area, a Sunday roast.

We sidestep this sojourn back to Ol’ Blighty in favour of a Croque Madame which leaves no indulgence to the imagination; ham cured in-house and rich in flavour, a creamy bechamel with emmental cheese sauce, and a fried egg on top.

For a few extra minutes with that view, opt for a dessert of classic crème brûlée with a ginger twist or a selection of tarts that look too pretty to eat, which is fine because it’s more than likely you won’t be able to.

There are mimosas and well-spiced Bloody Marys made to order, or Prosecco is available in unlimited quantities for an additional £17 per person.

While the idea of a bottomless brunch conjures up images of raucous groups guzzling, the reality is far more refined pairs sipping.

Because, despite some subtle contemporary flourishes, Le Pont de La Tour remains, at its core, a French brasserie for the well-heeled picking their way down the now well-trod cobblestoned alleys of Butler’s Wharf. And we wouldn’t have it any other way.