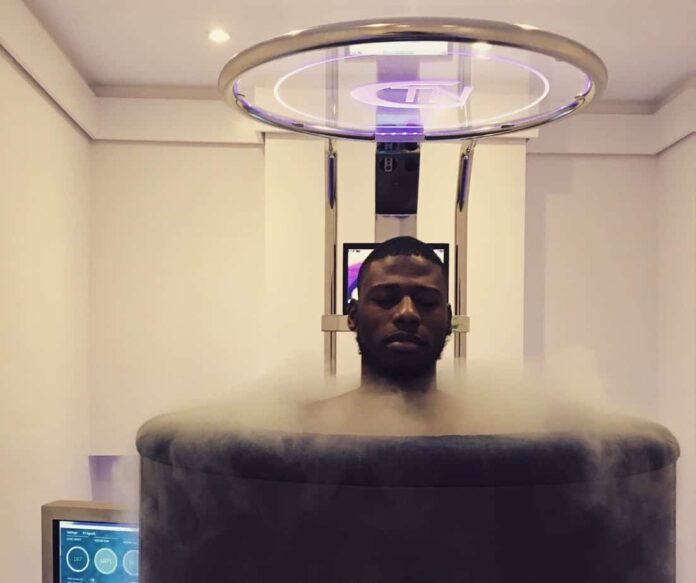 If the post-workout recovery of footballer Cristiano Ronaldo and Olympian Mo Farrah are anything to go by, chilling out after a hard session at the gym just took on a whole new meaning. We are talking, of course, about cryotherapy, the new health craze that champions exposure to extreme cold for short periods to treat and prevent muscle soreness, boost skin collagen and even burn calories.

Originally developed in Japan, cryotherapy treatments have been growing in popularity in Europe and the United States for the last decade, and makes its way to the City in the form of LondonCryo, the Square Mile’s first full-body cryotherapy facility.

What is it?
Whole body cryotherapy involves exposing your body to temperatures of around -140 degrees celsius for between two and four minutes. ‘Cryo’ comes from the Greek word meaning ‘icy’ or ‘frost’, so any cold-based medicinal treatment like ice-packs or baths could be considered cryotherapy, but the most popular way to administer whole body cryotherapy is in a cryo-cabin, which is what is on offer at LondonCryo.

Founder Maria Ensabella, a Melbourne native and self-confessed fitness fanatic, discovered cryotherapy as a post-workout recovery tool in the US and Australia, but found the UK lagging behind and spotted major potential for the technology in the City’s “work hard and work out harder” culture.

How does it work?
A cryo-cabin is an individual-sized chamber that gradually fills with liquid nitrogen (or dry ice) chilled to temperature of -140 degrees celsius. You stand in the chamber, head exposed, wearing minimal clothing, for a prescribed period (usually three minutes) and watch the clock. This extreme drop in temperature forces your body into a “fight or flight” survival mode, where blood is pulled to your core to help protect vital organs and body functions. This extra-oxygenated blood is then released around the body once you emerge from the chamber and start to warm up again.

What are the benefits?
According to LondonCryo, the benefits of cyrotherapy range from reduced inflammation and muscle soreness following a workout and improved performance thanks to a rush of red blood cells and increased blood flow. It also “rebalances” the mind and body, decreasing the level of stress hormone cortisol while flooding you full of endorphins, and promotes calorific burn – a reported 800 per session. All that extra oxygen in your blood is also said to be great for reducing wrinkles, tightening pores, and improving the health of skin and nails.

The US Food and Drink Administration has been casting doubts over these claims, having found little evidence to back them up, but anecdotally we can report a definite boost in energy within several hours, and a noticeable reduction in post-workout muscle soreness the day after the session.

How much?
As part of their launch, LondonCryo is offering a fortnight of unlimited sessions for £299. A single session costs £90, while an unlimited monthly membership will set you back a cool £599.

Where can I try it?
LondonCryo, 20 Artillery Lane E1 7LS or visit londoncryo.com