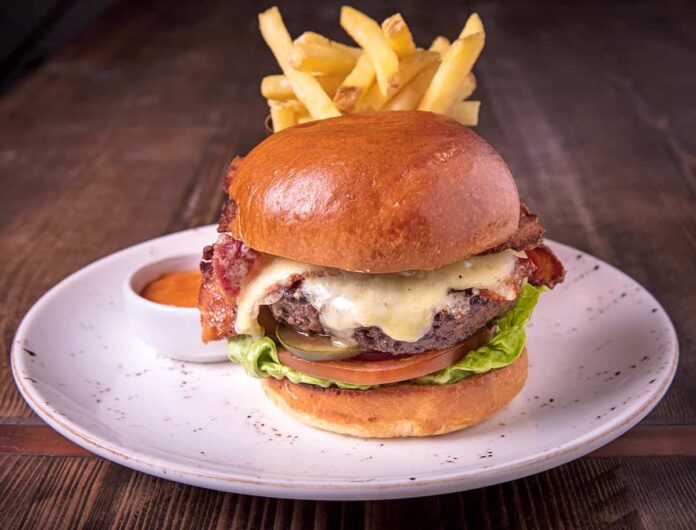 THE year 2016 brought with it Brexit, Trump, and perhaps most perplexingly, consolidation of the trend towards single-dish eateries on the London food scene.

Want a bowl of Frosties? Head to Shoreditch’s oft-mocked Cereal Killer Cafe and prepare to pay close to a fiver for the privilege. Craving crisps? Soho’s HipChips will set you up with artisanal fried potato slices with Peruvian ceviche salsa. And when only a toastie will do, make a beeline for Melt Room’s classic trio of cheeses grilled to perfection between two slices of thick sourdough.

While there’s much to be said for doing one thing and doing it well – though exactly how much better a bearded hipster can drown your cocoa pops in milk is a question explored in the new musical Spilt Milk – single-dish dining has left little room for, well, choice.

When Flock, a cafe-cum-burger-joint, opened under Tower Hill bridge earlier this summer, its tagline ‘Coffee and Beyond’ suggested just that, but could they deliver the goods?

Owner Lincoln Ogunde was well aware of London’s appreciation for specialised drinking
and dining when he arrived here after years working as a management consultant around Europe.

Growing up amongst coffee plantations in Nigeria, he developed a connection with the coffee bean, and a special interest in the way it was marketed around the world.

“In Europe, the coffee house is more a lifestyle hub; you can go there for your morning coffee but you can also turn up in the evening when you might want a beer or a glass of wine and some food and be confident that it’s all going to be the same standard,” he explains.

“In London, it seems like everyone thinks that if you’re going to do food or drink well, you have to pick one thing and stick to it… I’m trying to challenge that system.”

And in Flock, he’s making a red-hot go of it, with cracking coffee in the morning, brunch
throughout the day, moving seamlessly into burgers and craft beers at night, all delivered in a cafe-style atmosphere that stands out for all the right reasons on chain-dominated Minories.

It’s clear he has the morning crowd sold, with lines out the door for flat whites and smashed avo. Evenings are quieter, which means the local workers clearly haven’t caught on to what can only be described as one of the best burgers in the Square Mile.

The Signature Burger is straightforward in combination, but nails the basics of top grade beef crowned with melted cheese, and just the right ratios of smoky bacon, tomato and pickles.

Not a kitchen to limit itself with the health conscious crowd, the Flock team also churns out an excellent swordfish steak with avocado and pesto smash, and a range of salads are also likely to hit the spot with those for whom brioche is a bad word.

It’s an altogether surprising standard to find at an establishment that markets itself, first and foremost, as a coffee shop, but to Lincoln it’s a no brainer.

“There’s an arrogance to coffee now that it’s fashionable; I feel like people expect a bearded guy behind the counter who’s going to teach you about it, and he knows best,” he says.

“Coffee shops have been around for more than 200 years; so if you’re opening one in 2017, you have to be prepared to do something different.”