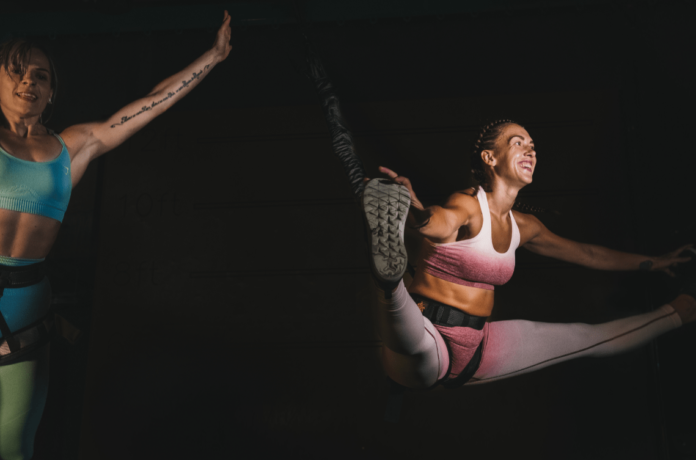 Above the pulsing music in a neon-lit fitness studio at Gymbox’s shiny new Cannon Street club, an instructor with an enviable six pack is asking the impossible. Or she would be, were it not for the bungee cord attached to a harness pulled uncomfortably tight around my hips.

All 16 of us in the class push out of a deep squat, gliding forwards through the air like superheroes, before landing briefly on our hands and pushing back off the floor to repeat the sequence.

This is ‘Gymbox Superfly’, a gravity-defying workout performed while suspended from the ceiling so you can bounce, glide and fly your way to a stronger core and long, lean muscles.

A low-impact cardio workout performed in a harness with a bungee cord attached to the ceiling that provides resistance and assistance for a set of simple bodyweight manoeuvres.

Superfly is the latest addition to the aerial programme at Gymbox, a fitness operator that runs more than 100 different classes across cardio, strength, conditioning, dance, holistic and cycle categories at its 10 sites across London.

Each class starts with a safety demonstration and plenty of time for beginners to get acquainted with the equipment. It’s worth noting that the harness feels akin to a tight nappy, and unless you’re a seasoned climber or circus pro, it will feel uncomfortable for the first few classes.

After a quick warm up, we strap on the bungee cords, which together with the harness, is a custom-designed for fitness by Bungee Superfly®.

We start with a series of squat jumps, side lunges and push-ups. Instructor Hattie is a professional dancer and something of an aerial expert, so she makes flying through the air look effortless, but in reality, the combination of pulling against the cord and adjusting your balance at speed makes even simple movements a challenge.

Once we’ve got the basics down pat, the class graduates to some dynamic moves and sequences; handstands into push-ups, backward lunges into fly-kicks, and rotating squats into plank jumps.

By the end of the 40-minute session, everybody is red-faced and panting. This is one of those ‘hidden’ cardio classes, where you’re so distracted trying not to faceplant that you don’t realise the intensity of the workout until it’s over.

The bungee cord offers both resistance and support, challenging you on some manoeuvres like lunges and making others possible by taking gravity out of the equation.

The scope of moves you can do with the assistance of the bungee is enormous, so expect to feel it in your legs, arms, back and particularly your core. The combination of cardio and strength training keeps your heart rate up so you burn calories and build lean muscle with hardly any impact on joints, making it a great workout for people who are coming back from injury.

It is also heaps of fun flying through the air for 40-minutes or so each week, which is perhaps why ‘Superfly’ has a long waitlist of participants for the two weekly slots at Cannon Street.

The new health club, which has been open just over six weeks and boasts a state-of-the-art lighting system, live DJs and purpose-built dance, yoga, conditioning, and spin studios plus a full gym is Gymbox’s fifth City site, though it is the only one currently running Superfly at 6.30pm on Tuesdays and 7pm on Wednesdays.

Memberships start at £73 per month.