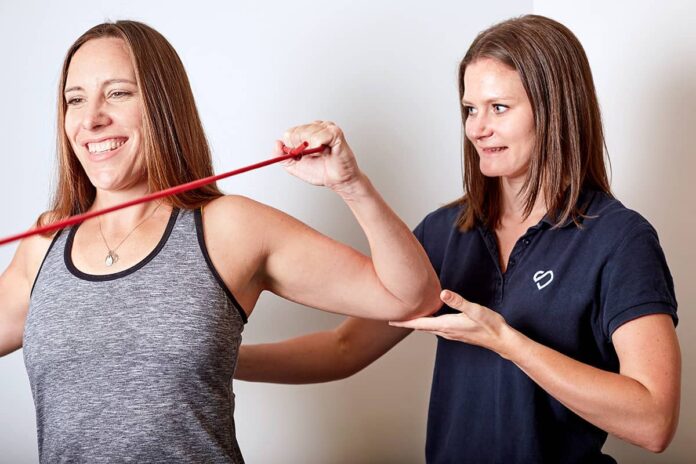 There is no slacking off on a squat when it comes to training under the watchful eye of biokineticist Kate Hayes.

“I constantly see people sinking down with their weight too far forward, knees shooting out over the toe, and the heels lifting,” she gripes.

“You have to keep your weight shifted back and squeeze your glutes to activate them – nobody remembers to do that.”

When Kate tries to explain her role on the team of physiotherapists and chiropractors at Ultra Sports Clinic in Monument, she is usually met with a blank stare.

Biokinetics – a specialised form of exercise therapy – is a well-established tool for rehabilitation and improved performance in her native South Africa, as well as in Australia.

But the UK has been slower to learn of the healing power of corrective exercise, which is how Kate found herself one of around 15 practicing biokineticists in a city of  eight million people; in other words, something of a rarity around these parts. But that hasn’t stopped her extolling the virtues of exercise as medicine to cure pain and improve quality of life, one wobbly squat at a time.

Biokinetics is defined as the science of movement and the prescription of exercise to improve a person’s physical function, health and quality of life.

“Think of it as exercise as a form of medicine,” Kate explains.

“‘Bio’ is your body and ‘kinetics’ is your movement, so it’s looking at the movement of the body to find out what is wrong with you, and then using movement to get you better.

“I would say that every single person that comes in has at least one muscle that isn’t working the way it should be, whether that’s because of an injury, or that their bodies have gotten into bad habits, or that they aren’t biomechanically perfect.”

During the initial consultation, Kate looks at medical history and a conducts series of tests to identify imbalances and muscle groups that might be restricting movement, the results of which might well surprise you.

In my own case, tightness in my hip flexors after exercising was put down to weak glutes; the muscles are failing to activate when I run, forcing other muscle groups to overcompensate.

“Our bodies are so good at taking the easiest route,” Kate explains, waving away my horror at being diagnosed, quite literally, with a lazy backside. “The minute there’s a weakness, something else fires.”

“We’re all very one-dimensional in our day-to-day lives; we get up, we get on the train to work, we sit at a desk, everything is on the frontal plane without any rotational movement and that’s where muscles get on autopilot and go to sleep.”

To ‘wake up’ my glutes before a run, I’m given six exercises – a series of controlled leg raises, lunges, squats and abductions to be performed with a resistance band.

Most clients book in for a 30-minute guided session once a week, but the ‘homework’ is just as important.

On my next visit, several months later, I had made noticeable progress and was able to graduate to more dynamic moves that challenge my balance further.

Biokinetics programmes are tailored to the individual, as are the results.

Working as part of a team of physiotherapists and chiropractors means that the bulk of clients Kate sees at Ultra Sport require some form of rehabilitation from an injury or corrective exercises to improve postural problems.

Biokinetics can also be used to help manage or slow down the regression of chronic illnesses like Parkinson’s disease and cerebral palsy.

Kate also assesses people looking to improve their performance in sport; prescribing exercises for runners to reduce their times or rugby players to increase their agility.

For someone like me, who is experiencing some pain or tightness but not enough to seek the help of a physio, biokinetics can make a huge difference to your everyday routine.

Several months of the corrective exercises and my legs are stronger, my balance and stability has improved, and the discomfort in my hip flexors has subsided so running feels a lot easier.