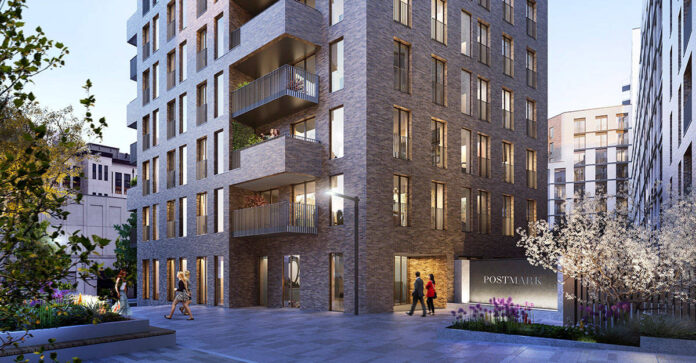 For more than 110 years, London’s post has passed through the Royal Mail sorting office on Farringdon Road en route to its destination, at its peak more than 4 million letters per day.

Now the historic Mount Pleasant mail centre is set to become an address in its own right as the site of one of central London’s largest new residential developments; the 681-home ‘Postmark’ from Taylor Wimpey Central London.

The new scheme will sit alongside the art deco mail centre and directly above the Postal Museum’s historic Rail Mail, the underground railway track used to ferry post to and from the sorting office until it was decommissioned in 2003 and reopened as a tourist attraction last year.

But those who buy into Postmark are unlikely to require much in the way of an outgoing mail service, as residents of what is being touted as “the most central new neighbourhood in London”.

A 6.25-acre mixed-use scheme that quite literally straddles London’s east/west divide, sprawling across two boroughs – Camden and Islington – and both the EC1 and WC1 postcodes.

Taylor Wimpey launched the project last week with the first of four separate phases, two in the west and two in the east. Each phase will be at the hand of a different architecture firm to reflect the individual look and feel of the surrounding neighbourhoods.

Once complete, there will be 10 blocks rising up to 16 storeys, though more than half of the site will be dedicated to open space – a mix of private and public gardens, courtyards and play areas – as well as retail and dining at ground level. Phase one in the western side of the site consists of 151 studio, one, two and three-bedroom apartments set around a private courtyard. Resident amenities include concierge, business facilities, a communal lounge, cinema, gym and a roof terrace.

Postmark is within walking distance of five Tube stations – the closest being Farringdon, which will earn its stripes as one of London’s best connected stations once the delayed Elizabeth line finally opens next year.

“The most central new neighbourhood in London” is a strong statement in an industry that is no stranger to hyperbole, but Postmark’s position between Clerkenwell, Chancery Lane, King’s Cross and Old Street puts it at the heart of the Capital’s creative, legal and tech quarters.

Add to that the local dining and cultural offerings – Exmouth Market, British Library, the Barbican Centre – and Taylor Wimpey’s marketing director, Darren McCormack, may be justified in describing Postmark as “an address like no other”.

“As the largest site acquired in Central London in 2017, Postmark is a flagship scheme for Taylor Wimpey Central London, and one that we are immensely proud to bring to the market,” he said.

“Here, style and design meet years of heritage, while the surrounding areas are some of London’s most in-demand locations to live and work.

“Mix these together and you create somewhere to live that’s incredibly special.”