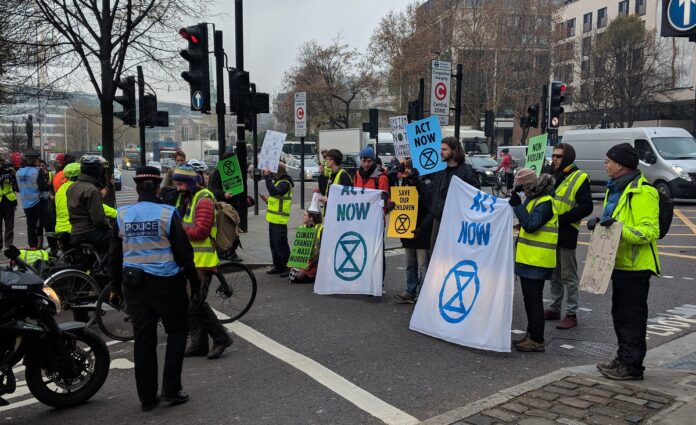 Protestors shutdown segments of the Capital – including parts of the City – as they called for government to seriously address tackle climate change.

The group ‘Extinction Rebellion’ – which calls for the end of “a period of abrupt climate breakdown” – this week targeted Lambeth and Vauxhall Bridges, as well as at Earl’s Court, Elephant & Castle, and Tower Bridge.

More than 100 environmentalists caused gridlocks across London, stopping commuters in their tracks.

Apologies to those being inconvenienced, but we have a planet to save, and less than 12 years to do it. #ClimateBreakdown pic.twitter.com/tf0K0lar3q

City of London Police were on hand around Tower Hill and the Minories to keep the local protest in order.

Angela, 40, from Cambridge, an Extinction Rebellion protestor who was at Elephant & Castle, said “It is good to be part of an act of civil disobedience against the government that is knowingly criminally negligent in protecting its citizens and biodiversity-loss.”

“We had a large group of photography students from the nearby college come out of their classes to join us, which was a great encouragement, when we’d been here a few hours and starting to flag.”

.@CityPoliceCops are managing a protest taking place in the Tower Hill/Minories area today which may result in delays to your journey.

If you are travelling through, or near to this part of the City, please check your route before setting off. @TfLTrafficNews

Campaigners carried signs painted with the message ‘Act Now’ and the Extinction Rebellion Twitter handle tweeted an apology for the inconvenience, adding: “but we have a planet to save, and less than 12 years to do it”.

However, the demonstration was not welcomed by some quarters of the public, particularly motorists who sounded their horns in disapproval.