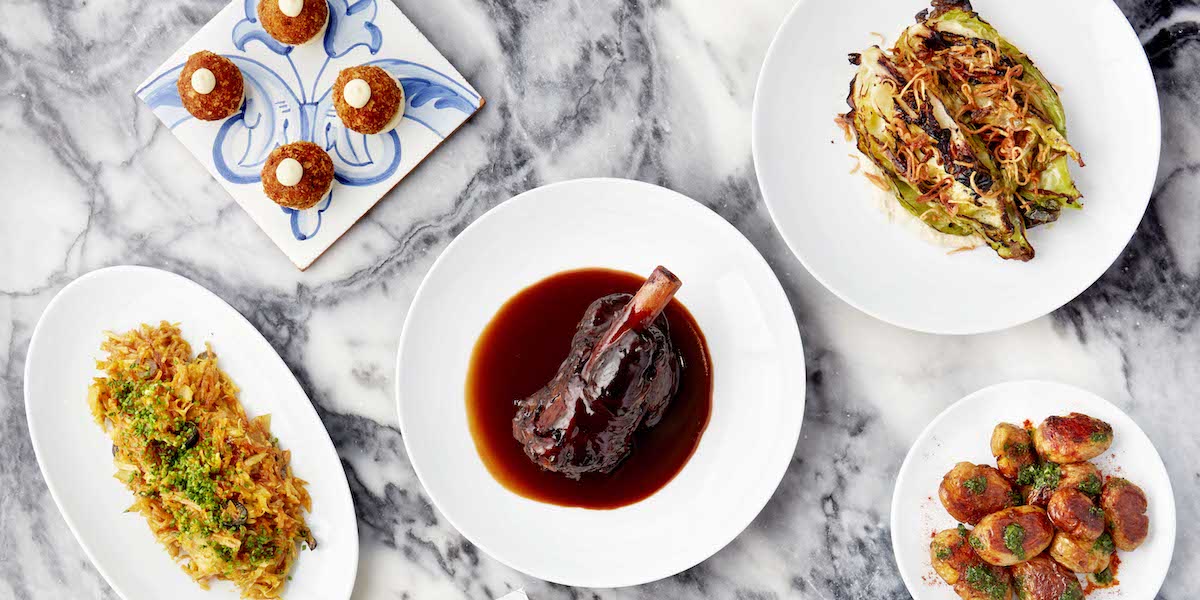 These guys launched their Broadgate site at the beginning of 2020, just before everything went to hell. The doors were only open for about three months. City workers were starting to notice where that strong and heavenly smell of garlic was coming from in Finsbury Square. But it was all shut down before Bar Douro could really cement itself as a new Square Mile food and drink destination.

We were so bummed because they have huge potential. We were lucky enough to get in when they first opened. And were obsessed right from the beginning. We were transported right back to Lisbon when sitting inside the small restaurant. The smells coming from the open kitchen, the tiled artwork and all that wine and port on the menu just screamed Portugal.

That’s why we were so pumped to hear about their DIY meal kits. These big boxes of prepared meals do a pretty damn good job at replicating the experience of dining in at Bar Douro City.

And all it needed to get us there, was peeling open the sealed bag full of Pata Negra ham. This is some of the finest cured ham out there – the kind of stuff you only really get when you travel to Spain or Portugal. God we’ve missed it, just as we’ve missed all our European holidaying. But this brought a small part of that experience into our own London home.

Next up were the deep-fried croquettes de Alheira. These were filled with smoked sausage (made of pork, chicken, duck and rabbit), and plenty of parsley. We were meant to delicately pipe some lemon mayo on top, but our plating skills are lacking.

It didn’t look anywhere near as nice as the picture we were trying to replicate, but damn they tasted magnificent. And they only took about five-minutes to cook and plate. Winner.

As we were stuffing our mouths full of croquettes, we began the next dish – Bacalhau à brás. Think of it like a salted cod hash. All we had to do was heat up the fish and olives, add the straw fries, and then beat in a couple eggs. We think we scrambled the eggs a little too much (it didn’t have the proper creaminess we think it was meant to have). But damn that stodgy dish of fried bits was divine – we actually left a decent chunk of it behind to have for breakfast the next day. And it was even better the day after!

Things crescendo with the main. A braised lamb shank comes vacuum sealed (all you need to do is heat it up in a bath of boiling water). This was served with Batatas a murro punched potatoes and grilled cabbage with a soubise sauce. The potatoes are covered with a good heap of paprika, confit garlic and herb dressing.

And the cabbage was that little bit of green which we really needed after all the richness we had beforehand. We do wish we had a little salad or some additional cleanly cooked vegetables to break up all the intense flavours going on in the feast, but we had plenty of rocket in the fridge so whipped up a quick salad of our own.

That’s the beauty of making all this at home – you can follow the meal kit instructions to the book or have a little more fun with it yourself. It’s up to you

After cleaning up the pans and pots, we chucked the finale in the oven. The Touchino de Ceu almond cake didn’t dry out in the reheating. In fact, it was so moist and buttery. We had this with a big glass of port we’d bought from their wine club a while back. It was the perfect ending to our little escape to Portugal for the night.

And now that things are about to open up again, you’ll have the option of either ordering these DIY kits to your home or heading into the Bar Douro restaurant itself. Dealer’s choice.

Delicious roast dinners in the City of London this Christmas