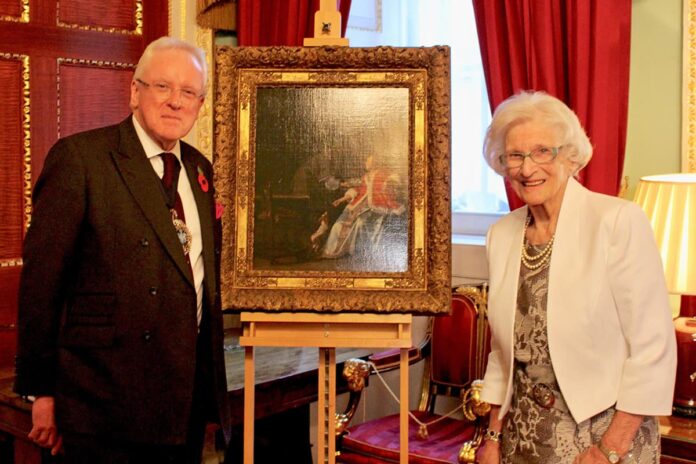 The Old Master painting reappears on the Swiss art market 20 years later, and is quickly snapped up by UK property baron Lord Harold Samuel, after which it spends another three decades on the wall at Mansion House as part of Britain’s largest collection of Dutch Art. Now, 72 years after it was stolen, The Oyster Meal is going home.

It all sounds very much like the plot to a Hollywood film, but our set is in fact the Square Mile, where the City of London Corporation this week restituted the painting to Charlotte Bischoff van Heemskerck, the 96-year-old daughter of the late Dr Smidt van Gelder.

Lord Mayor Andrew Parmley officially handed the painting over to Mrs Bischoff van Heemskerck at a ceremony at Guildhall on Monday, in one of his final duties in the top job before Charles Bowman takes over later this week. He said the decision to return the painting was “unanimous” among City officials and Lord Samuel’s family.

“When I heard about the restitution claim, I felt it entirely right that The Oyster Meal be reunited as soon as possible with the family who owned it,” he said.

“I sincerely hope that the handover of The Oyster Meal to Mrs Bischoff van Heemskerck will represent a happy, albeit, long overdue, resolution for her and her family.” The Commission for Looted Art in Europe lodged a claim for the oil on canvas painting (1634-1682) on behalf of the family at the beginning of the year, which was substantiated by documents tracing the history between its disappearance and its reappearance on the art market in Switzerland in 1965.

Lord Samuel bequeathed The Oyster Meal to the City of London in 1987 as part of a collection of 84 Dutch art works on the condition that they would be retained at Mansion House as the official residence of the City’s Lord Mayor.

When notified of the claim, however, Lord Samuel’s daughters agreed the painting should be returned to the family and readily waived the condition.

“This painting was one looted from our family during the plunder of Arnhem which impacted so many families in our community,” she said.

“For me, its return is representative of the co-operation between the Allies, which helped save our way of life so many years ago. Although it is a bittersweet recovery in the context of the great devastation and loss of the war, it is very meaningful to my family, and we are delighted to bring it home again to honour my father’s legacy.”