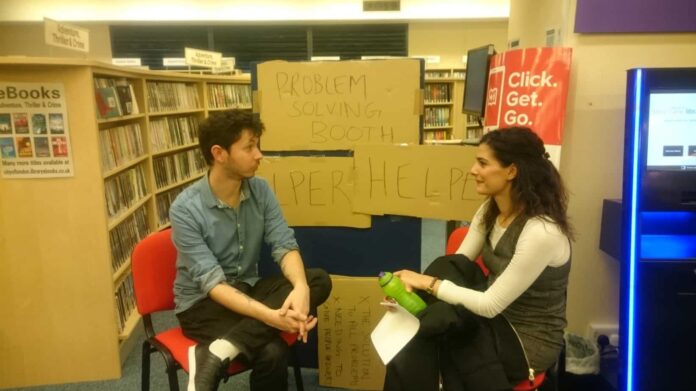 An oasis is defined as a ‘refuge, relief or pleasant change from what is usual, annoying, or difficult’. And it’s exactly what entering Shoe Lane Library felt like when the Dragon Café opened its doors last week.

On any given day, the library on the corner of Shoe Lane and Little New Street already serves as an escape from the hustle and bustle of the Square Mile’s financial district for many City workers and residents. Today, however, as they leave the grey concrete and noisy streets behind them and descend into the library, visitors are greeted by much more than merely literature.

“Hello, and welcome to the Dragon Café. Would you like a free massage?” a young woman says to every person entering the library, pointing to her left where a few visitors are getting a shoulder rub. Next to them, two people are sat on chairs chatting, while a sign above them says “Problem-Solving Booth”.

In the opposite corner, a lecture is taking place with the listeners tucking into their pre-packed lunches. A few feet over, others are running around with crayons, paint, brushes and paper. Close to the entrance, there is a bathtub filled with rubber ducks.

The bathtub full of rubber ducks also tells stories of how people cope with mental illness.“So that’s a Lunch & Learn discussion on a new mental wellbeing and motivation app. Over there they’re setting up a mask-making workshop, and if you pick up the shower head of the bathtub, you can hear other people’s stories on how they deal with stress and anxiety, and record your own story,” explains Declan McGill from Mental Fight Club, the charity that brought London the first Dragon Café to Borough, in 2002.

“Usually facilities for mental wellbeing are very clinical, sterile, kind of frightening and not creative or inspiring at all,” says Declan. “The aim of the Dragon Café was to offer people an open space where they can feel safe to relax and recharge. Now we’ve brought that to the City.”

While there is more of a buzz today than one would usually expect in a library, the atmosphere is warm, welcoming, and homey.

“This is only the beginning, we have a lot of very different events coming up later in the day,” he says with enthusiasm: “We’ve got magicians coming in, a terrarium making workshop, Tai Chi and Kung Fu classes combined with mindfulness sessions… We really make sure there’s something for everyone.”

The beauty of the Dragon Café concept is that there is no pressure, says Declan: “Visitors can take as much or as little as they like. We want them to know that they are in control. They can just observe what’s going on, reflect or practice mindfulness on their own, or engage in everything on offer, it’s up to them.”

Studying our inner selves and the image we project out to the world through the use of masks with John Foley 🎭 pic.twitter.com/mUlwPT5z1S

Despite increased efforts in recent years to remove the stigma around mental wellbeing, it continues to be a prevalent issue amongst City workers.

A 2017 survey by the City Mental Health Alliance found that 47% of respondents have experienced mental health difficulties while working for their current employer. Only half of them disclosed this to someone at work.

The café is the latest venture in a series of events and campaigns launched by the City of London to tackle poor mental health in the Square Mile.

“What’s brilliant about this collaboration is that we can team up our knowledge of City workers and residents and make sure the programme the café offers is tailored exactly to the needs of the locals,” says Xenia Koumi from Business Healthy, a City-led initiative encouraging businesses to meet the health and wellbeing needs of their workers.

“We know that a lot of workers in the City are male, middle aged, and at risk of cardiovascular diseases. They can also be a difficult group to reach, in terms of getting them to speak up about their mental health,” says Xenia. “So we’re keeping that in mind when setting up the programme. I think what distinguishes this Dragon Café is the fact that we’re really targeting the local population, trying to bring together workers and residents. In that sense, it’s kind of a hyperlocal service.”

The Dragon Café in the City will run fortnightly on Thursdays between noon and 8.30pm until 12 July. The next one will take place on 22 February. For more details on upcoming programmes, go to dragoncafeinthecity.com.