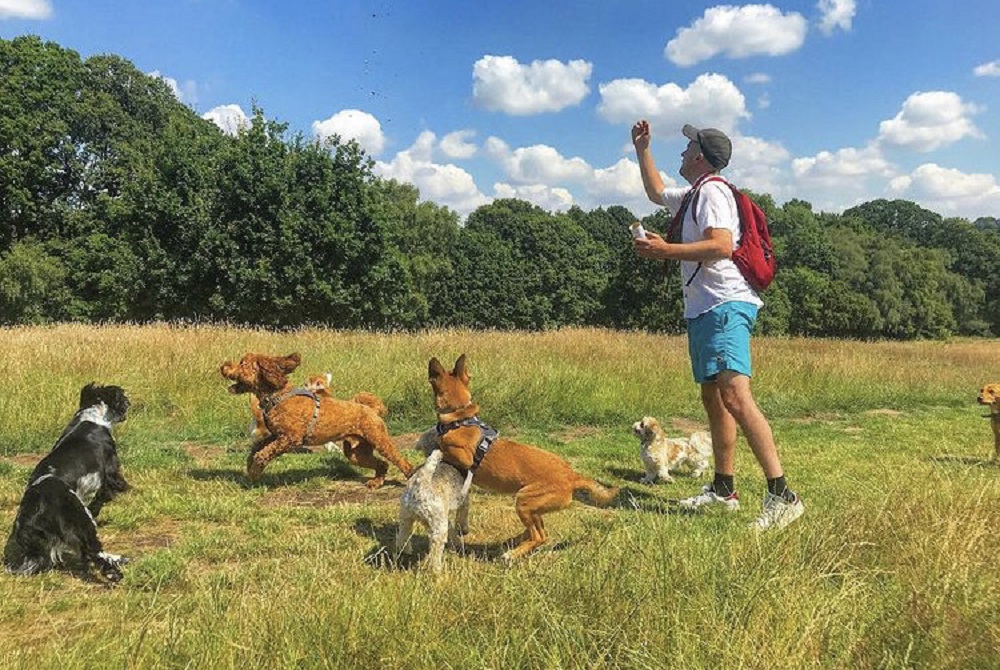 “We love the Heath, we love and respect it. It’s a privilege to live in London and it’s a paradise for dogs,” said professional dog walker Enrique Quintano.

He runs the Camden Hands dog walking business and exercises dogs from Camden and Kentish Town.

Professional dog walkers and their clients are urging the City of London Corporation to rethink the rules for a new licence it plans to introduce in October.

And some of them say if they can’t get a licence on Hampstead Heath they will have to walk along pedestrianised sections of the North Circular or along canals in north London.

The Corporation which cares for Hampstead Heath is planning to sell 40 timed licences to professional dog walkers.

It followed a public consultation in 2019 and some concerns about the “potential increase and the impact that the activity has” for other people using the beauty spot.

It’s estimated that 800 dogs are taken for a walk every day by professional dog walkers.

The  £300 per year licence allows walkers to exercise up to four dogs at a time.

The licence was going to start this April but was put on hold because of the pandemic.

However the Hampstead Professional Dog Walkers Association said there should be 100 licences for up to six dogs at a time.

It started a petition urging the Corporation to delay the move because of the pandemic, and rethink the rules.

So far more than 1,800 people have signed the petition since it launched three weeks ago.

It also said there should be 100 licences for up to six dogs at a time.

Edward Freeman  from the 63-strong trade body, which represents two thirds of the dog walkers, warned: “With the  rapid rise in puppy sales since the first lockdown back in March 2020, we expect to see a spike in demand for dog-walking and dog-sitting services across the city when many will be returning to work.”

Vets around the Heath told the association that the number of puppies registered with them went up 200 per cent last year.

He added: “If people are unable to access reliable dog daycare services it could have devastating repercussions for our customers and the dogs involved.

“These repercussions could include shelters becoming overwhelmed with dogs and dogs being left alone for prolonged periods of time, causing separation anxiety in the dogs as well as behavioural problems linked to a lack of socialisation.”

He added: “How ridiculous it would be if central government said ‘we are only going to allow 300 plumbers to work in London this year.’”

He feared that some dog walkers would go out of business.

Mr Quintano said the pandemic has affected dog walkers and he thinks the new licence would make it hard for some to make a living as they also have insurance and transport costs.

He said the group picks up dog poo bags abandoned by other walkers and staged a clear up of the Heath last year.

He said: “The Constabulary on the Heath like us because we know the Heath.”

He added that the walkers keep their eyes peeled to spot missing dogs and report any problems at the beauty spot.

One dog owner who signed the petition said: “I walk my own dog but come into contact with the regular professional dog walkers. I think that they make a valuable contribution to the safety and control of Heath users, other dogs and help prevent anti-social behaviour by their presence on the Heath.”

Another owner who signed the petition said: “My dog walker is responsible/good at her job and these changes are harmful to businesses and to the overall well-being of dogs.”