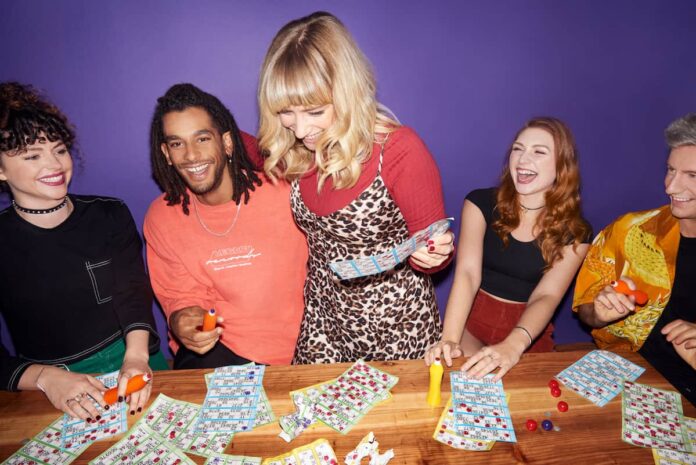 London has rediscovered its love for bingo.

Pop-up bingo parties have been growing in popularity over the years, gathering a cult following of boozy and ultra competitive millennials. And now, just a bingo ball’s throw from Liverpool Street Station, a new seven-day-a-week bingo hall has opened up.

Dabbers adds interactive game show elements, prizes that are actually desirable, and some great food and drinks offerings.  It’s designed to be big and brash. From the moment guests arrive, they will be swept up in an immersive lobby that combines memorabilia with an energetic bar featuring live DJ sets.

They then collect their bingo cards from costumed staff before descending into the epic bingo arena. Down below resides retro social bingo tables, plus banquette tables on the sidelines for those who want to slowly ease into the competitive gaming experience.

Things then get a little over the top. But that’s the whole point of Dabbers. A huge custom bingo blower hurls out numbers as pyrotechnics, flashing lights and loud music blares around the arena. Expect a sensory overload.

Those who favour retro styling should head to Vintage Bingo on Tuesday nights for a literal interpretation of the old-school classic hosted by a team of veteran callers who have been coaxed out of retirement.

Anyone in it for the long haul will enjoy Bingo Voyage on Fridays where the main prize features an exclusive weekend away. Energetic eccentrics will love Disco Bingo on Saturday nights drenched in UV lights, or there’s Family Brunch Bingo on Sunday lunchtimes, hosted by crowd pleasing comics cheeky enough to entertain the little ones.

The speciality ‘Well Rounded Menu’ is just as bizarre as all other offerings. Simply put, all the food is round like a bingo ball.

Expect to nosh on melon balls wrapped in ham, and waffles topped with ample crumble and cinnamon sugar. This all works alongside a drinks menu featuring craft beers, cocktails and a carefully curated wine list. All of this can easily be delivered to the table to ensure no numbers are missed.

They may add a whole lot of spectacle to the evening, but bingo remains at the centre of everything. For the Dabbers team, bingo offers guests an unrivalled opportunity to socialise, create community, and have a super silly and exciting night out. Plus, it’s so easy to play, so anyone join in.