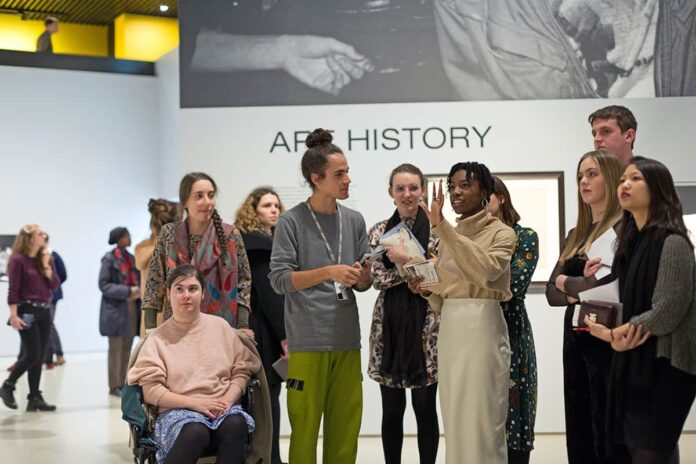 WHEN the leaders of the City’s top arts institutions teamed up last summer to announce the Culture Mile initiative to transform the area between Farringdon and Moorgate into a creative and cultural hub, they were frank about the size of the job that lies ahead.

“This area is not throbbing and bustling on the weekend,” Museum of London director Sharon Arment conceded. “We have to fight against our infrastructure… but we want to change that.”

Major building works, the pedestrianisation of streets, pop-up installations and imaginative outdoor programming are among a whole host of changes on the table for the project, which could be up to 15 years in the making.

Barbican managing director Nick Kenyon said the partners, which include the Guildhall School of Music & Drama, the London Symphony Orchestra, and the City of London Corporation, had to “be more than the sum of our parts”.

And culture vultures will get their first glimpse at what these lofty ambitions could mean when they are realised with the annual Barbican OpenFest on 17 and 18 March.

It is the first major event on the Culture Mile calendar, and will serve as a showcase of everything the Barbican does best with the help of the four partner organisations.

Barbican director of arts Louise Jeffreys said that while the Barbican had held events previously to attract new audiences, this is the first time the partners would be teaming up in an official capacity.

“Now, they’re at the core of it, which means our footprint has really expanded,” she says.

Expect Guildhall students singing and dancing in the streets, light and sound activations in disused spaces, makers’ markets from East London craftspeople, and creative workshops to get you back to nature in an urban setting. And that’s just the outdoors.

“Some of our most popular events in the past have been where we open up some of the buildings for people to just wander around and experience events for free,” Louise says.

“During the day you can get into the Barbican Concert Hall and Theatre and check out rehearsals, and it tends to attract a whole new audience who might not have set foot inside the Barbican before, which is really the whole point.”

Here are four events to look out for this weekend:

Pedestrians usually try to steer clear of Beech Street but a specially commissioned light and sound installation will aim to give the pollution-choked tunnel a new lease on life.

Tunnel Visions: Array is a free art installation by Tony Award-winning artists 59 Productions that will transform the tunnel into an audio-visual performance space to music by Finnish composer and conductor Esa-Pekka Salonen.

It will be a first step in one of the primary aims to improve “the backbone of the Culture Mile”, which has been labelled by some as one of the worst thoroughfares in London.

Some longer-term suggestions include reducing traffic to westbound lanes only, while providing pedestrians with more walking space and livening up the area with art installations.

Louise says the plan is to compare pollution levels in the tunnel before and after the installation to see what a difference two days without traffic makes to the air quality.

There will be a 30-minute performance of Tunnel Visions: Array every hour across the weekend. Tickets are free but must be booked in advance on the Barbican’s website.
Free, Saturday 3pm-9.30pm, and Sunday noon- 9.30pm
Beech Street

Moroccan artist Yto Barrada asks the big questions around reinvention in her exploration of how a community comes back from a disaster in Agadir, currently on display at the Barbican Curve gallery.

Now young creatives and industry leaders will ask a few of their own around the future of creativity, and whether the arts and culture industries are headed for Utopia or disaster in the face of funding cuts and inequality, but also new technology and accessibility.

Say Something is an arts ‘triage’ made up of industry experts to provide advice about creative careers and how to pursue them, while Do Something explores reinvention and the concept of a future arts utopia through a series of workshops programmed by Barbican young creatives.
Free, Saturday 5pm-8pm, Sunday noon-6pm
Barbican Curve Gallery

We were all young once, and this stellar line-up of films probably captures it in some shape or form.

Filmmaker Sophie Vuković tackles the issue of personal and global identities by tracing her ancestry through her parents’ migration from Eastern to Northern Europe via Australia in Shapeshifters, while For Ahkeem looks at race, class and inequality for people of colour in the US through the eyes of a 17-year-old girl growing up in St Louis Missouri.

A bold selection of shorts by African filmmakers offers a glimpse into the realities of growing up surrounded by violence and desolation, and Gérard Blain’s seldom-screened A Child in the Crowd paints an autobiographical portrait of youth during the German occupation of Paris.
£10.50 (standard, adult) Saturday and Sunday, various times
Barbican Cinema

Losing one’s way along the Barbican’s highwalks is a rite of passage for visitors to the area, but those wandering aimlessly trying to find the entrance to the Museum of London this weekend will at least have something to entertain them in Satellites, a live performance from the Guildhall School.

Artist Andy Field has reimagined London through a series of intimate encounters with young artists, each with their own story to tell.

Audience members are encouraged to approach performers to hear past, present and future accounts of life in the Capital, presenting an interactive look at London and its many layers.
Free, Saturday and Sunday, 5pm-7pm
Barbican Highwalks