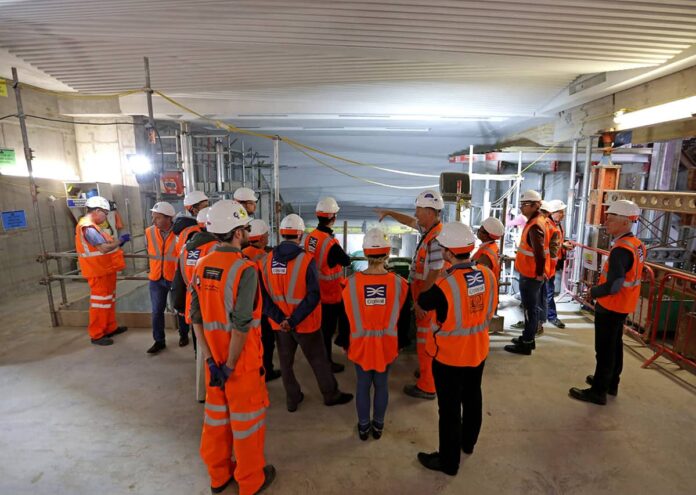 Crossrail bosses have pledged to “meet or beat” the planned opening date for the central part of the railway – despite a construction stop during coronavirus lockdown.

The Paddington to Abbey Wood section of the Elizabeth Line is due to open in summer next year, and now project chiefs say it could be sooner.

But a series of independent reports on the long-delayed rail link warn of further “slippage” and growing costs – even before Covid-19.

London politicians remain “highly skeptical” of the plans, pointing out previous “broken promises” and delays to the railway.

Originally due to open in December 2018, Crossrail will link Heathrow and Reading in the west, and Shenfield in the east to central London, Greenwich and Bexley.

The Elizabeth line will increase rail capacity in the capital – vital as the population of London continues to grow.

But the project has faced a series of delays, and seen costs balloon from £14.8 billion to a projected £18.25 billion – with no funding yet secured for the latest £650 million overspend.

Speaking at a virtual Transport for London (TfL) board meeting, chairman Tony Meggs said the importance of the line “has never been greater” than during coronavirus.

With social distancing, London Tube capacity will fall to 15% of normal levels, even as the network returns to full service.

Thousands of commuters will be unable to travel safely on public transport at peak times, making extra capacity from the new Elizabeth line even more crucial, he said.

“Now we’re not just talking about getting more and more people into the centre of London for work,” Mr Meggs explained.

“We’re actually talking about people’s health and safety as well – trying to create more space for Londoners under these constrained conditions.”

The project boss said he is “completely committed to doing everything we can, notwithstanding the real impact of Covid-19, to meet or beat the schedule that we outlined.”

Construction work on Crossrail sites was halted on 24 March following the Government announcement of coronavirus lockdown.

Just 200 of its 4,500 construction staff – those carrying out security and safety works – stayed on site.

But 25% of the workforce has now returned, as the project ramps back up with lockdown rules loosening.

And a further 2,000 staff have been working “jolly hard” from home during the crisis, Mr Meggs said.

The chairman claimed “innovation” and “new thinking” will help the project regain lost time – but did not specify what steps would be taken.

Chief executive Mark Wild said teams will “blockade” the central section of the line and treat it “like an offshore oil rig” – bringing in staff to work 24/7 to speed up progress.

But a series of independent project reports – carried out monthly by engineering consultant Jacobs – paint a less optimistic picture.

By March, the railway was 14 weeks behind targets set in December, the most recent study claims.

Crossrail already faced “major challenges” in February – and it is “extremely likely” that coronavirus will have a “significant” additional impact on the project, the reports warn

By March, the scheme was already almost £500 million over budget – with the total bill standing at £15.42 billion.

And the risk to the budget “remains understated” by Crossrail, Jacobs claimed.

“A key issue for Crossrail is the significant disparity of planned work versus actual achieved progress data across the project,” the document warns.

The railway’s own assurance team says Crossrail “has a culture of optimistic target date-based reporting, in which the development of ‘politically-acceptable’ forecasts appears to pervade all project-level planning and reporting”, it adds.

And London Assembly members – who have scrutinised the project from its inception – remain critical.

“I recognise that new working practices are now being adopted and I hope I am proved wrong when I say this – but based on previous broken promises about completion dates and all the evidence from the independent consultants, I remain highly sceptical that Crossrail will be fully running by the Summer of 2021,” she warned

Conservative transport spokesman Keith Prince said the summer target would have been “challenging” but “probably achievable” before Covid-19 – but now seems unrealistic.

“My background is in sales,” he said “So I know you should always under promise and over deliver.

“The fundamental issue with this Mayoralty is that Sadiq Khan loves telling people what they want to hear rather than telling the truth about what is achievable.”

“I’ve got a lot of time and respect for Mark Wild – he’s a good operator,” he added.

“But if Crossrail are going to continue in the old mode of obscuring and misrepresenting then nothing has changed.”

But Labour transport lead Alison Moore said her meetings with the Crossrail top team have reassured her that they are being “determined” not “optimistic”.

“There are things that none of us can predict at the moment – but what they are clear about is they are doing everything they can behind the scenes to progress the project,” she said.

“There’s an awareness that they let things slip significantly in the past, to all of our frustration,” she added

“That seems not to have escaped them at this time as they face additional challenges.”