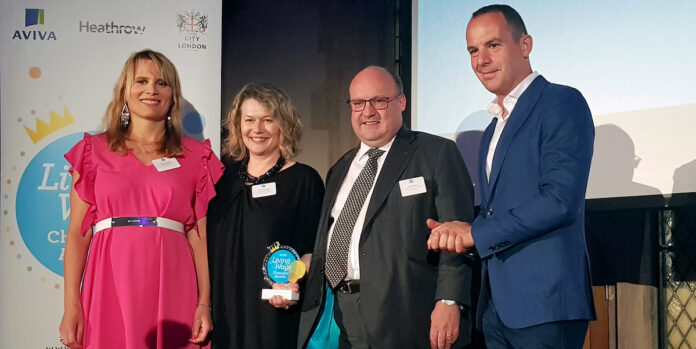 The City of London Corporation has won an Industry Champion Award for its creative campaign encouraging financial and professional services firms to pay the London Living Wage.

The announcement was made at this month’s Living Wage Champion Awards, hosted by the Living Wage Foundation, after the two-week campaign reached over five million people across the Capital.

In February, the authority took over the London Underground with posters encouraging more firms to pay staff at least the London Living Wage of £10.55 per hour.

The posters were displayed at nine of London’s busiest Tube stations, including Liverpool Street, Euston, Victoria and Paddington.

The campaign launched with an event at the Museum of London, had wide engagement on social media, extensive press coverage, ran newspaper advertising, and involved direct discussions with City businesses.

Catherine McGuinness, policy chair at the Corporation, which itself is an accredited Living Wage employer, said: “We are delighted that our work on this vital issue has made a positive impact.

“One in five people employed in the capital don’t earn a wage they can live on and we all have a responsibility to change this statistic.

“Our campaign helped raise this vitally important issue amongst millions of City workers, residents and businesses.

“We want all City firms to recognise that paying the London Living Wage is both good for their business, and the right thing to do.”

Katherine Chapman, director of the Living Wage Foundation, said: “Congratulations to the City of London Corporation on become a Living Wage Industry Champion.

“Their campaign to drive Living Wage take-up throughout the City was innovative and bold and demonstrates their commitment to promoting the Living Wage.

“This year has been an historic one for the Living Wage Movement as we have reached over 5,000 Living Wage employers, showing that businesses continue to recognise the importance of a wage that truly covers the cost of living. It’s fantastic to be able to publicly thank organisations like the City Corporation for all their support.”

The City of London Corporation is a long-running supporter of the Living Wage Foundation. It has been an accredited Living Wage employer since 2014, meaning a significant increase in wages for some of its lowest-paid employees. And from this year the City Corporation will strengthen its own Living Wage policy by paying staff and its suppliers’ staff the new rate, with immediate effect, when the updated Living Wage is announced in November each year.

This is opposed to paying staff the new rate from April the following year, which is the most common approach taken by employers – meaning annual increases in the rate reach people’s pay packets more quickly.