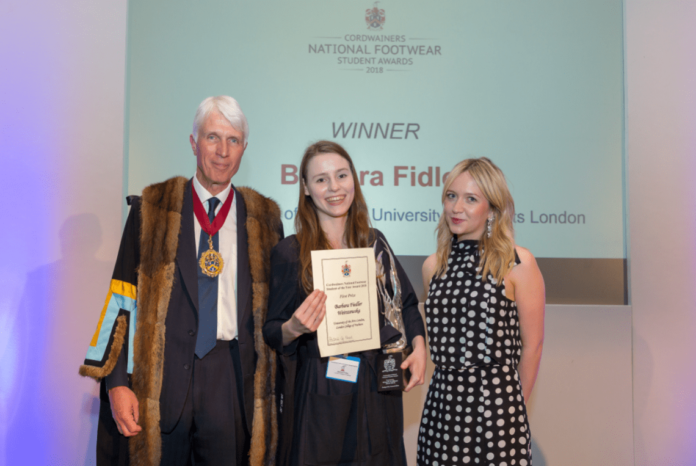 The Worshipful Company of Cordwainers has named its Footwear Student of the Year, awarding the top prize to London School of Fashion student Barbara Fidler.

More than 200 footwear students, industry influencers and Cordwainer members turned out for the ceremony at Clothworkers Hall on 7 June to see Ms Fidler claim the £5,000 prize, part of the Cordwainers’ £100,000 annual commitment to support education in the footwear and leather sectors.

A judging panel of footwear industry experts selected her portfolio from a pool of 15 finalists from the three universities that offer courses in shoe design, De Montfort University, University of Northampton, and London College of Fashion.

The Cordwainers founded the competition in 2014 to celebrate and encourage young footwear talent. Previous winners have gone on to fund further education in footwear design or start their own footwear design business.

Judge Atalanta Weller noted that between them, the three judges have some 80 years of experience in the footwear industry, but in the five years of the Cordwainers competition, they “have never yet failed to be excited and impressed by the enthusiasm, talent and professionalism, and most importantly originality, of the 15 designers who have made it to this final judging stage”.

Guest judge and keynote speaker Camilla Elphick said, “It is so important to nurture and support the raw talent of UK-based footwear design students, as they are the future not only of the British footwear industry, but also innovators of footwear design on a global scale.”

“There are so many amazing students and to be a winner is so unexpected! The Cordwainers’ Awards is the pinnacle and you know you’ve reached it when you win this award!”