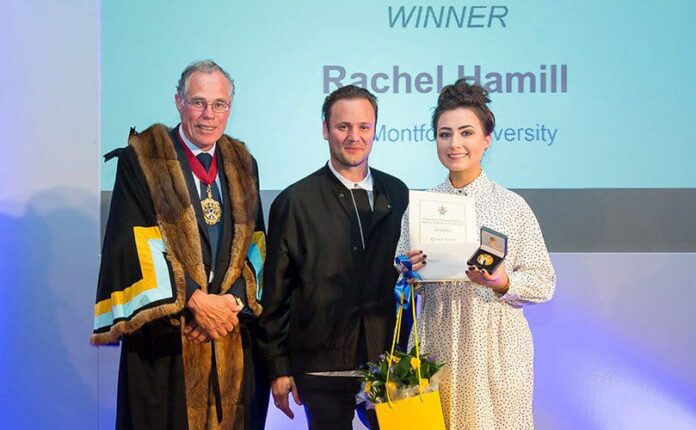 The pathways to a career in shoe design are many and varied.

Jimmy Choo followed in the footsteps of his cordwainer father; Nicholas Kirkwood wanted to create footwear to match the statement hat designs of milliner Philip Treacy, and Christian Louboutin has said his famous stilettos were originally an act of defiance against an art gallery forbidding women from wearing heels for fear they might damage the floorboards.

For former architecture student Rachel Hamill, it was the desire to design a product that would give every woman confidence that drove her to enrol in a BA Honours in Footwear Design at De Montfort University.

“I thought about fashion, but everybody is different shapes and sizes, and body image is a real issue for a lot of women – some lack the confidence to express themselves through clothing,” she says.

“With footwear, it doesn’t matter what size you are, a great pair of shoes and you’re always winning.”

It sounds like an advertising tagline for a footwear label, which Rachel could be well on her way to establishing after being named the Worshipful Company of Cordwainers’ Footwear Student of the Year earlier this month.

A judging panel of footwear industry experts selected her Victorian dollhouse-inspired portfolio from a pool of 15 finalists from the three universities that offer courses in shoe design, De Montfort University, University of Northampton, and London College of Fashion.

More than 200 industry leaders and students attended the ceremony at Clothworkers Hall on 8 June to see Rachel take home the £5,000 prize, part of the Cordwainers’ £100,000 annual commitment to support education in the footwear and leather sectors.

Rachel is already planning to put the money towards starting her own label somewhere down the line, but first there’s the matter of her final weeks as a student at De Montfort, followed by the always-testing graduate job search, which will most likely lead to a move to London from her native Portadown, southwest of Belfast.

“I would love to spend a couple of years at a large label and really develop my skills, but of course it’s so competitive,” she says.

She said meeting Kirkwood, who delivered the keynote speech at the ceremony, was one of the best things about winning the prize, as was the validation from industry leaders.

“I’m also so grateful to the Cordwainers for the opportunity… to get that recognition of me as a designer, from other designers who I admire, was really amazing.”