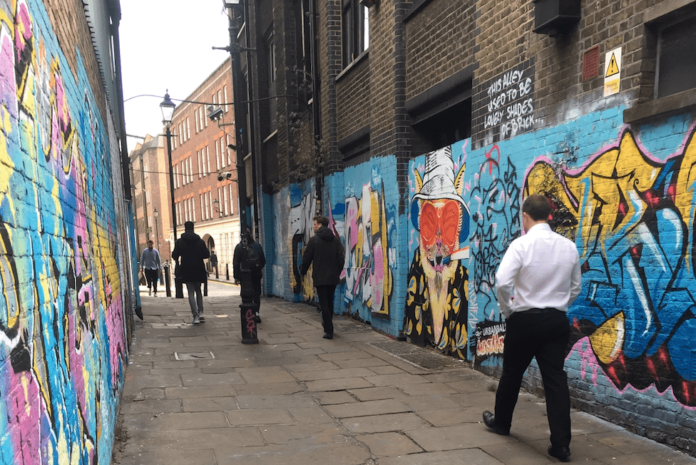 Shoreditch may be world-renowned for its street art, but one mural in a Spitalfields walkway has drawn the ire of local conservationists who say it defaces a historic warehouse.

Members of the Spitalfields Trust were furious to see a colourful mural painted directly on to the walls of an alleyway, known locally as Fleur de Lis Passage,  connecting Shoreditch High Street with Fleur de Lis Street, part of the Elder Street Conservation Area.

British Land was granted planning permission for a mixed-use office and residential development on the historic site in 2015 when then mayor Boris Johnson controversially overrode Tower Hamlets’ decision to block the application.

The Blossom Street development will retain facades of some historic buildings on the site, including a row of Victorian warehouses at 12-15 Blossom Street, which are owned by the City of London Corporation and the canvas for the street art in question.

Campaigners lost their final appeal against the development in November last year, but were angered to find British Land had commissioned a mural to be painted directly on to the building, as well as the warehouse opposite, ahead of commencing construction on the scheme.

A British Land spokesperson said the mural by Global Street Art was intended to combat “significant recent antisocial behaviour issues” in the street.

“The intention was to brighten it up, make it feel less intimidating, and prevent further nuisance graffiti and other antisocial behaviour,” she said. “A special coating was applied to the brickwork before painting to enable the artwork to be removed in the future.”

But trust chairman Patrick Streeter said British Land should have consulted the City Corporation as the building owner and Tower Hamlets Council as the local planning authority that regulates conservation guidelines in the area.

“If British Land was intent on ‘artwash’ of this kind, it would have been a simple matter to erect temporary boards or hoardings that would have provided protection,” he said.

“Instead the historic patina of the two most important buildings in the area has been buried under layers of paint applied directly to their surface, whilst the stone flags are covered in paint splashes.”

British Land has an option on the site until February 2019, and the development is being marketed online, but Mr Streeter took pains to point out that it may never actually go ahead, calling on the City Corporation to step in and restore the buildings to their original condition.

“British Land is merely looking after the historic buildings on the site,” he said. “Its main obligation is to ensure that no harm comes to them, that they are well preserved, during what may well turn out to be a very brief period as their custodian.”

When contacted by City Matters, a spokesperson for the Corporation said that as British Land owns the development option on the site, the company is also responsible for the management of the building.

A spokesperson for Tower Hamlets Council confirmed it was also not consulted before the artwork was created, but added that there is currently no requirement to do so.

However, he hinted that the local authority might be looking to seize more control over street art in the borough in the future.

“The council is in the process of reviewing its anti-defacement policy… part of the review looks at what greater powers could be held locally, so we strike a fair balance between allowing for genuine street art and being able to continue to protect our local communities,” he said.

“We expect to have a revised procedure in place early in the New Year.”