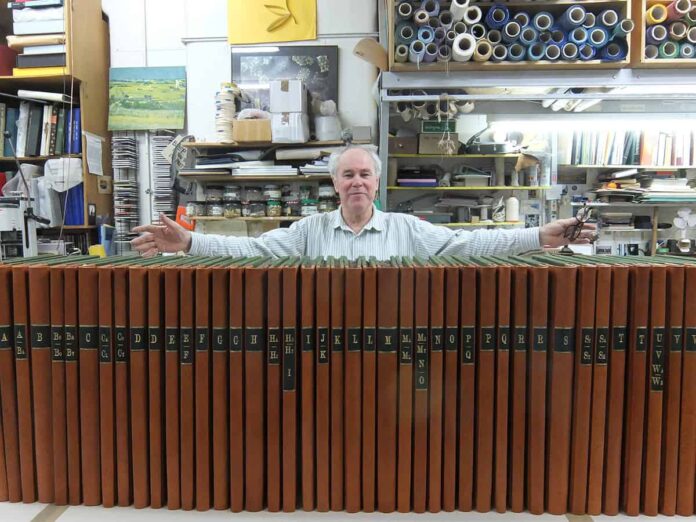 WE have been at Clerkenwell’s Wyvern Bindery less than a minute before a well-dressed gentleman wanders in, getting stuck into a conversation with owner Mark Winstanley about different styles of headbanding; the cord crowning the spine of hardcover books.

Our visitor, himself a former lettering artist, moves to excuse himself: “I’m sorry to have interrupted you, I just felt compelled to come in here.”

You don’t have to be a lettering artist, or even in the design field to feel that pull towards Wyvern, where its open workshop of binders have beavered away bringing new books into the world and old books back to life since the early ’90s.

“I would hate for it to be some corporate place where all the work is done behind closed doors,” Mark says. “I want people to see how it’s done, that’s what makes it so fascinating.”

And Wyvern certainly is a fascinating place; a labyrinth of work benches, plan chests and guillotines, where the binders press pages, stitch headbands, hammer bindings, craft covers from the rolls of richly-hued leather and buckram stacked around the room and, finally, emboss them with titles.

Tucked high up on the shelves is a small collection of grand old volumes, ranging from Mark’s own leatherbound edition of George Anson’s Voyage Around the World to Harry Potter film props Advanced Potion Making and Secrets of the Darkest Art, lined up like library books waiting to be returned to Hogwarts.

It all sounds very oldy worldy – and there’s certainly a well-honed air of William Morris about the place – but there’s a reason Wyvern is still in business when others have folded, and it’s not because battered old sets of the Encyclopedia Britannica keep walking through the door.

“Of course the big jobs stand out in your memory – those big restorations or film props – but it’s all the small jobs that have kept us going… and hard work.”

These ‘small’ jobs are the folios, boxes and presentations that still call on this traditional craft despite often being a product of far more contemporary pursuits like those of the media and design agencies that have moved into the area. Case in point: in the corner of the workshop, Helga, a postgraduate student, is busily sewing the binding for her thesis, while Ben, a graphic designer and Wyvern’s newest member (or “LOL: lowest-of-the-low”, according to Mark) is cutting card for some design folios.

It’s certainly a marked change from when Mark started out as a graduate of the London College of Printing in the 1970s but Mark is matter-of-fact about his place among Clerkenwell’s new guard.

“There’s probably less creativity than there was – we aren’t the designers – but the focus now is on the construction,” he says. “We’re the place you come to get it done.”

He takes a similarly pragmatic approach to the future of the trade, admitting that while Wyvern has carved a niche for itself, there isn’t a lot of room for others; a fact driven home by the closure of the bookbinding course at the London College of Communication last year.

“A lot of these art schools tend to be more conceptual than hands-on; if you pick up a pencil or a chisel you get booted out as a subversive,” he says. “I was invited down to the London College of Communication to advise on the course a couple of years ago, but after a couple of meetings I had to say to them ‘none of you know anybody in London that can hire these kids for a job’.”

Instead he wants more opportunities for trade-based training to preserve the skills among the next generation, confident demand for their services will remain.

“We’re the packagers,” he says. And doesn’t everybody appreciate good packaging?