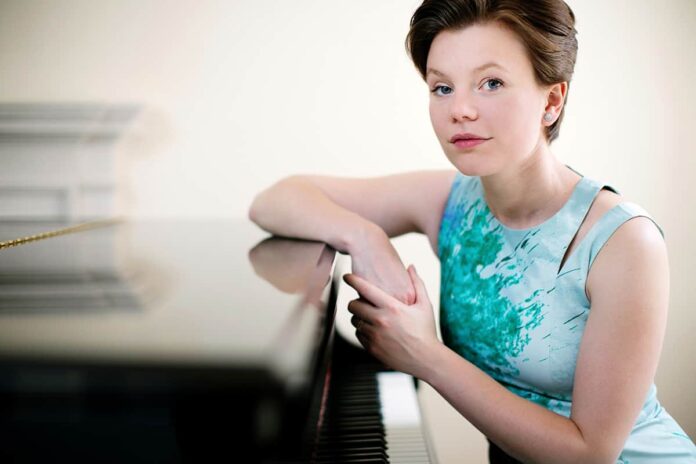 The £89million performance venue and rehearsal space didn’t open until two years after she graduated from the school’s music programme, which makes her performance next month as part of the Alumni Recital Series all the more special.

“I watched Milton Court being built but never got the chance to play there, so it’s really exciting for me to have the opportunity to go back and see old friends too,” she says.

Clare will perform works by classical music’s biggest composers – Beethoven, Haydn, Stravinsky and Scriabin – but it’s the world premiere of Youth by her former peer, composer Edmund Finnis, that is attracting the most attention.

Its 10 brief pieces named for different inspirational encounters or moments are the first Edmund has composed for the piano, however this isn’t why Clare is feeling the weight of expectation.

“Each piece is very personal, very intimate, like a little glimpse into his development as a composer… it’s not trying to be clever, just very honest,” she says.

“It’s a big responsibility because we are close friends so there’s a little bit of pressure there.”

Nonetheless performing under pressure is something this former Royal Philharmonic Society’s Young Artist award winner has plenty of experience with, having taken to the stage at Royal Festival Hall with the Philharmonia and at the Belfast International Arts Festival.

European tours are coming through thick and fast; Clare is getting ready to head to Poland to take on Panufnik’s Piano Concerto with the Warsaw Philharmonic Orchestra and will also make
world premiere recordings of two keyboard concertos by Myslivecek with the Swedish Chamber Orchestra later this year.

She would love to eventually play at Elbphilharmonie in Hamburg (“I visited recently and it’s the most stunning concert hall I’ve ever seen”) but for now is excited for what is her coming home, of sorts.

“It’s such a varied programme of virtuosic mainstream works and then some contemporary pieces… it’s not often that I have the chance to play a programme that really shows the range of the piano.”