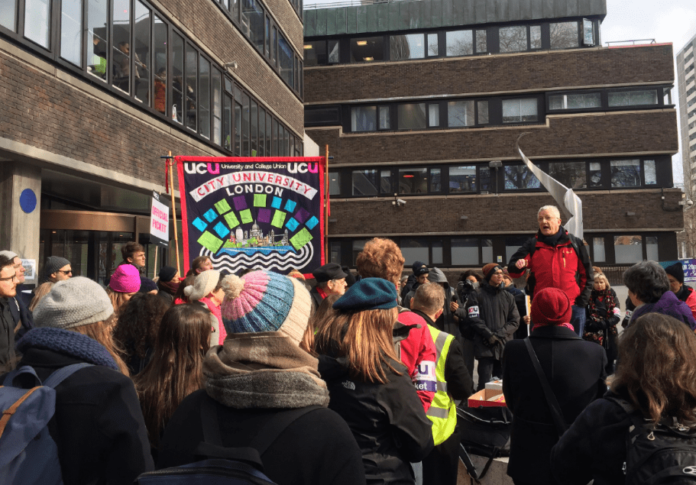 City University students are divided over the strikes that have seen lectures and classes cancelled for a second day as staff walked out as part of nation-wide strike planned action over a pensions dispute.

Tens of thousands of lecturers from 57 universities across the UK formed picket lines yesterday in unprecedented industrial action that caused the loss of an estimated 575,000 teaching hours affecting over one million students across the UK.

The strike was called by the University and College Union (UCU) after Universities UK (UUK), a representative body of university employers, proposed changes to the sector’s main retirement fund, which is said to have a deficit of £6.1billion.

The changes would see the pension fund, the Universities Superannuation Scheme, changed from a defined benefit scheme to a riskier defined contribution plan, which according to UCU, would result in a reduction in retirement benefits by between 20% and 40%. The typical academic stands to lose an estimated £10,000 a year.

The union said UUK “refused to negotiate”, leaving them with no alternative but to strike. However, a representative for UUK said they had met with UCU more than 35 times during the last year “in an attempt to find a joint solution to address this deficit and the significant rise in future pension costs.”

The strike has divided City University students, with many supporting the lecturers and others calling for a refund in tuition fees for cancelled classes.

One second-year mechanical engineering student said: “I support their decision to strike no matter what. It’s their pensions – it’s an extremely important issue, and it’s going to affect generations to come.

“If I was in their shoes, I would be very angry about it, and I would strike too.”

Others expressed anger at the scale of disruptions the strike has caused their studies.

“While I respect the lecturers’ right to strike, I do not believe that the students should be punished for what is ultimately a dispute between the university and its staff,” said one international student who is completing a Masters in Journalism.

“Many of us have moved from across the world specifically for this course, and are paying large sums of money to attend what is reputed as one of the best journalism schools in the world.”

One first-year economics student said: “If the lectures are going to be rescheduled, it’s fine. But if not, it’s money wasted. We should get it back.”

Last week a petition was set up by City University’s Pro Bono society, demanding reimbursements of tuition fees for disruptions caused by the strike. It has so far been signed by over 4,200 students.

“Teaching staff across the country are taking industrial action to fight for their pensions, for many this means temporarily forgoing their wages during that time,” a spokesperson for the Pro Bono society said.

“It is our assessment that this would actually lead to an increase in profit for the institutions as they no longer bare the cost of paying those staff during that period.

The University’s terms of enrolment state that City is not liable to compensate students for a failure to perform its obligations, if that failure is due to circumstances beyond its control, including industrial action by its employees.

However, despite being legally protected, the University sent emails to staff, stating that if they choose to take part in the industrial action, they may be personally liable for any claims for damages made against City because of the strike.

UCU general secretary Sally Hunt said of the emails: “Unfortunately, some universities are choosing to take a hard-line approach to try and bully staff into not joining the strike action over pensions.

“This is utterly counterproductive and, in our experience, treating staff with such contempt only hardens their resolve.

“Instead of threatening striking staff, university leaders should be focusing their energies on getting Universities UK back to the negotiating table to sort out this dispute.”

City University has not responded to City Matters request for comment. According to a statement on the university’s website, they were “consulted on the proposals by UUK and responded in support of the proposals as they would put the scheme on a sound financial footing”.

They also stated they would reschedule any lectures and other teaching activities “with reasonable notice” to students, however City UCU has said it believes it is “unlikely that much missed teaching will be rescheduled” due to the logistics and because many lecturers will refuse to teach while the strike is ongoing.

While City University have stressed they have been “working hard to put contingencies in place to minimise any impact on students’ education”, some students said they received little to no information.

One first-year law student said: “Everyone is confused about which days we have lectures and which days we don’t, because not all of our lecturers are on strike.

“We came in today not really knowing if we have class, and we came in just in case.”

The number of institutions and lecturers on strike is likely to increase as the industrial action continues. Strikes are planned for the coming three weeks, with an additional day of striking each week, totalling in 14 days.

Sally Hunt said this week that the union had a mandate to continue strike action until July, possibly disrupting students’ final degree exam periods in May and June.

UCU members will be meeting on 2 March to consider universities’ response to the first wave of strikes. They said they “hoped no universities would want a prolonged dispute that drags out towards exam season”, but that members were “determined to fight for fair pensions”.