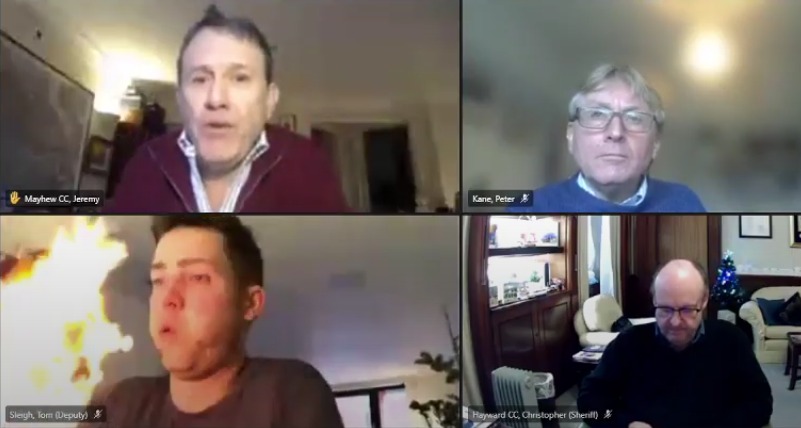 Everyone who has worked from home this year will know that it comes with pros and cons.

You might miss seeing your colleagues, but there are undisputed advantages to joining remote meetings in your pyjamas or making lunch while half-listening during an afternoon conference.

But such multitasking can come with consequences, as proven by Tom Sleigh, a politician at the City of London Corporation.

Mr Sleigh was taking part in a meeting, with his camera on, when he managed to set his right arm on fire in front of some 30 colleagues.

He didn’t catch his sleeve over a burning hob in the kitchen though. Mr Sleigh informed us: “Today, I used a USB lighter, really amazing tech, to ignite a candle but it accidentally ignited my notepaper.”

He added that the notepad must have been “very dry” for it to go up in flame so quickly.

The amusing mishap took place during a City of London Resource Allocation Sub-Committee, which was uploaded to YouTube.

Seeing the funny side, Mr Sleigh videod a short clip of the moment he caught fire and posted it on Twitter, commenting: “Today didn’t go as smoothly as I hoped.”

He told us he had “badly” burnt his fingers, and “plunged them into a cold sink”.

Mr Sleigh is a Labour party member deputy at the City of London, and works as a senior business manager at Amazon UK.

Callum Anderson said: “Hands down the most spectacular Zoom incident I’ve ever seen.”