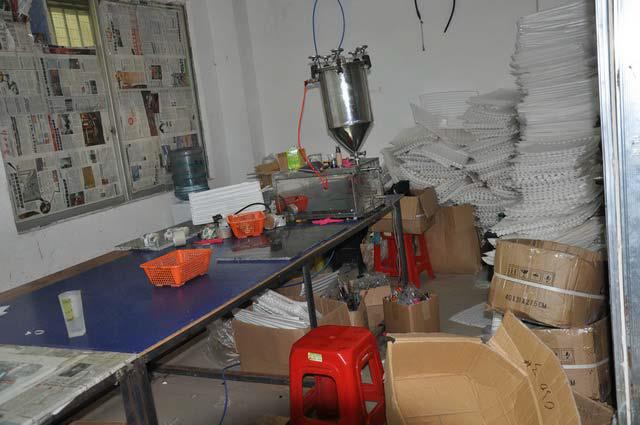 The raid saw a large number of items, such as suspected counterfeit perfume products, seized following an investigation by PIPCU officers. The retail value of the seized items is estimated to be over £40,000.

Laboratory tests have shown counterfeit perfume often contain poisonous chemicals including cyanide and even human urine.
Fake cosmetics such as eyeliner, mascara, lip gloss and foundation have also been found to contain toxic levels of chemicals as well as harmful substances such as arsenic, mercury and lead.

All of these can cause allergic reactions, such as skin irritation, swelling, rashes and burns, and leave the consumer with longer term health problems.

Counterfeit make-up is often produced in unsanitised and unhygienic factories and there have been cases where rat droppings and rat poison have also been found in the phoney cosmetics.

With Valentines gifts being purchased online, officers are warning the public about the consequences of providing personal details to non-reputable sellers. Criminals often use people’s personal details to commit fraud such as registering counterfeit websites.

The PIPCU officers have overseen the disruption of over 67,000 counterfeit websites since the unit’s inception in 2013.

Counterfeit websites can be identified by making simple checks. Some of the sites include poor spelling, grammar, images and inconsistent fonts.

Action is then taken to suspend the sites by working closely with Nominet, the UK’s central registry for all .uk domains once it is established that the websites are in breach of the Copyright and Trademarks Act.

Detective chief inspector Teresa Russell said: “Valentine’s Day is a counterfeiter’s dream. With jewellery and perfume being popular gift choices, it’s easy to fall into the trap of a cheap offer.

“Fake makeup and perfume can contain harmful chemicals and even rat droppings that cause swelling, rashes and burns. Purchasing counterfeit goods online often results in your personal details being used to set up new fraudulent websites.

“Treat your Valentine to something legitimate from a reputable seller. Avoid heartbreak, don’t buy fake.”

Dr Ros Lynch, Director of Copyright and Enforcement, Intellectual Property Office said: “We strongly advise shoppers to keep Valentine’s Day safe as well as special this year – counterfeit fashion goods, makeup and electrical items are not only the result of criminal activity, but many can harm as well”.

Individuals or businesses who have fallen victim to a fraud facilitated by identity crime should report to Action Fraud on 0300 123 2040 or online at actionfraud.police.uk.