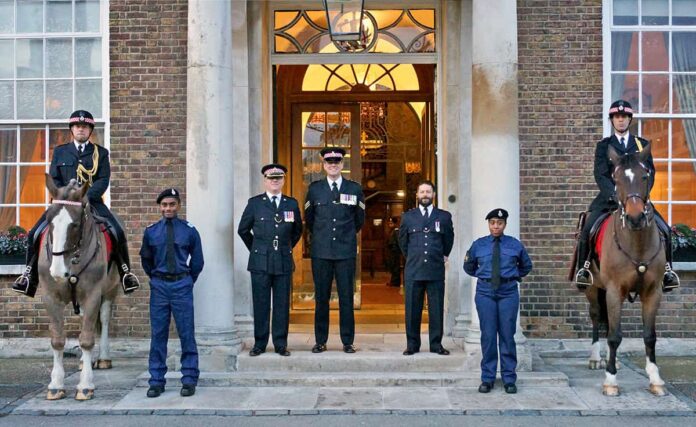 THE biggest ever cohort of special constables have joined the City’s ranks – just as the force was chosen to pilot a nationwide ‘gold standard’ scheme.

City of London specials have been assisting their regular colleagues in policing the Square Mile for over 100 years, but a unique slice of history is hoped to be made among the latest group of recruits after their passing out ceremony at the Honourable Artillery Company earlier this month.

In a force first, Vicky Smith will train to become a mounted special constable after two years working as a horse trainer at the City’s Bushy site.

Prior to offering her services to the force as an equine specialist, she had been in the industry for 12 years, but before seeing her new role advertised was considering packing it in to become a full-time officer.

“I was lucky enough to get the job, and therefore it was the perfect opportunity to continue working with horses at the same time as getting an insight into how the police work,” she said.

“I thoroughly enjoy my job as a trainer, so becoming a special will give me the opportunity to develop a new skill set alongside giving me an extra insight into the role that I do as a trainer.

“I’m really looking forward to the challenges ahead.”

During the passing out ceremony, attended by  Commissioner Ian Dyson, the new cohort were officially given the legal power to act as a constable by a magistrate, and presented with their warrant cards.

Specials in the City are active in every part of the force. In 2017, specials undertook 16,800 duties, with more than 4,500 hours spent on response.

They also played a vital role in the protection of the public during, and in the aftermath of, the London Bridge terror attack. Two were on duty that evening and were among the first officers to attend the scene.

Others arrived in minutes to help in the control room and a further 28 were on duty by 9am the following morning.

Special commander James Phipson, who is the chief officer of the special constabulary in the City of London Police and also responsible for wider volunteering in the force, addressed his new troops at the ceremony, and warned them that the most challenging period in their police career was about to come.

“It will not always be exciting, and will not always go smoothly, but we will support and encourage you in everything you do, and you will fast discover a confidence and assertiveness you never knew you had. Whatever you do in your police career, it will be one of the most exciting, diverse and fulfilling careers imaginable. The only advice I can give you is that no two shifts will ever be the same, and the more you put into this, the more rewarding it will be.” Because of the expertise and support the specials bring, the City has been selected to host a national pilot scheme to establish a new ‘gold standard’ for the recruitment, training, development, and deployment of volunteers.

This will see the numbers of specials in the City double to over 100, with support being provided to regular constables as well as in specialist areas such as cyber and economic crime.