A CITY Police officer who had acid thrown in his face was back on duty just seven days after an attack which he thought would leave him blind.

PC Simon Ashton feared he would never be able to see his family and kids again after Timmy Sullivan launched a bottle of ammonia at him on 15 April.

Sullivan was accosted by officers after being spotted erratically driving his black Mercedes Vito taxi on the wrong side of the road in Fleet Street. He failed to stop when approached and sped off towards Charterhouse Street.

Two City Police officers – one being PC Ashton – happened to be in the area and managed to halt Sullivan at the junction with Goswell Road.

“As the calls came in that the vehicle was driving dangerously and towards people, hitting parked cars, my concern was that this was another terrorist attack,” recalled PC Ashton in a video that the force hopes will educate the public on what to do in a case of such an attack.

PC Ashton said that when he approached the taxi, Sullivan was non compliant and refused to step out from behind the wheel.

“He then started to make a reach to the passenger’s side door compartment,” he added. “With my previous experience with firearms this really put the hairs up on the back of my head.”

As Sullivan reached down PC Ashton made the assessment that he had to detain the driver.

And it was during the resulting struggle that PC Ashton became another victim of London’s appalling surge in acid-related attacks.

“I was fighting, at that particular time, I believed, for my life. He managed to get an arm free, at which point I had a liquid thrown in my face.”

PC Ashton was immediately blinded and floored, leaving his now lone colleague to eventually bring down a fleeing Sullivan with a Taser in nearby Gee Street having been punched in the face during the pursuit.

“I was in absolute agony, [I was thinking] will I ever see my kids again, my family?” said PC Ashton.

“Some time after that I was given a bottle of water and I doused my head with that. I wanted to get my police dog out of the vehicle and help with the chase but I was totally blind.”

He was rushed to Royal London Hospital and underwent extensive treatment to irrigate his eyes and relieve the pain. It was over an hour before his vision started to return. Now back on the beat, PC Ashton says he keeps his guard just a little higher than he did before the attack.

“I’m fine with [returning to work] but out of every incident we should learn from it. Does it make me more cautious? I’m more cautious over persons carrying liquid bottles.”

Upon investigation, Sullivan was found to be in possession of a 20-inch machete, a crowbar, and a stolen taxi licence badge. 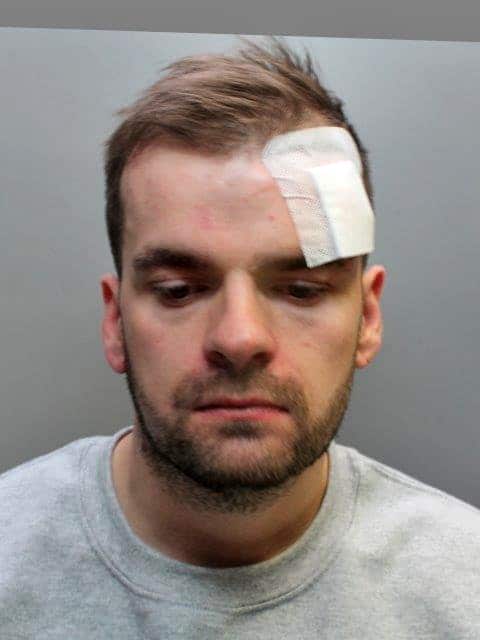 The taxi being driven was stolen in a burglary not attributed to Sullivan and resulted in the charge of handling stolen goods.

“Acid can cause atrocious injuries, and we have seen a number of reports of incidents of this nature in the Capital in recent months. Both of these officers should be commended for a remarkable job detaining Sullivan to ensure he was brought before the courts to be held accountable for his actions.”

He also received concurrent sentences for the remaining charges, as well as being banned from driving for the next nine years.

At an earlier hearing, Sullivan pleaded guilty to one count of Section 18 attempted GBH, plus additional offences of dangerous driving, assaulting a police officer, driving whilst disqualified, driving without insurance, handling stolen goods, and two counts of possession of an offensive weapon.